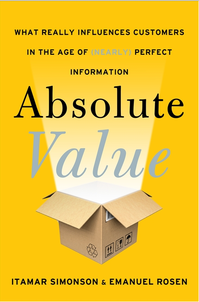 So suggests continuing research from the Stanford Graduate School of Business into the challenges marketers face in reaching consumers in the digital age. As you might suspect, the research shows that a wealth of online product information and user reviews is causing a fundamental shift in how consumers make decisions.
As consumers rely more on one another, the power of marketers is being undermined, said Itamar Simonson, a Stanford marketing professor and the lead researcher.
. . .
To get the full impact of the findings, you first have to know the conclusions of a similar experiment decades ago by Dr. Simonson, . . . .  . . .
The researchers found that when study subjects had only two choices, most chose the less expensive camera with fewer features. But when given three choices, most chose the middle one. Dr. Simonson called it “the compromise effect” — the idea that consumers will gravitate to the middle of the options presented to them.
. . .
Flash forward to the new experiment. It was similar to the first, except that consumers could have a glimpse at Amazon. That made a huge difference. When given three camera options, consumers didn’t gravitate en masse to the midprice version. Rather, the least expensive one kept its share and the middle one lost more to the most expensive one.
“The compromise effect was gone,” said Dr. Simonson, or, rather, he nearly exclaimed the absence of the effect, underscoring his surprise at the findings. They are to be published next month in “Absolute Value,” a book by Dr. Simonson and Emanuel Rosen.
Today, products are being evaluated more on their “absolute value, their quality,” Dr. Simonson said. Brand names mean less.