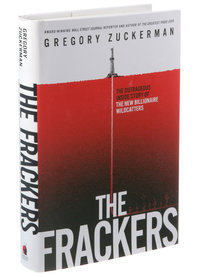 (p. 7) In “The Frackers,” Gregory Zuckerman sets out a 25-year narrative that focuses on the half-dozen or so Texas and Oklahoma energy companies behind the fracking boom, especially Chesapeake Energy, the Oklahoma City giant that is the Exxon Mobil of fracking. Technologies are born. Gushers gush. And fortunes are made and lost.

In the process, Mr. Zuckerman assembles a chorus of little-heard American voices, from George Mitchell, the Greek goatherd’s son whose company first perfected fracking, to Chesapeake’s two founders, Aubrey K. McClendon and Tom L. Ward.
. . .
Geologists knew that layers of shale spread across North America contained commercial amounts of oil and gas, but not until a young geologist at Mr. Mitchell’s company, Mitchell Energy, perfected a new “secret sauce” of water-based fracturing liquids in the early 1990s did layers of shale — in Mitchell’s case, the Barnett Shale of North Texas — melt away and begin to yield jaw-dropping gushers.
Oryx Energy, a company that was based in Dallas, was among the first to pair fracking with horizontal drilling, producing even more startling results. Still, it took years, Mr. Zuckerman writes, before larger businesses, especially the skeptical major oil companies, fathomed what their smaller rivals had achieved. This allowed what were flyspeck outfits like Chesapeake to lease vast acreage in shale-rich areas, from Montana to eastern Pennsylvania.

Book being reviewed:
Zuckerman, Gregory. The Frackers: The Outrageous inside Story of the New Billionaire Wildcatters. New York: Portfolio/Penguin, 2013.