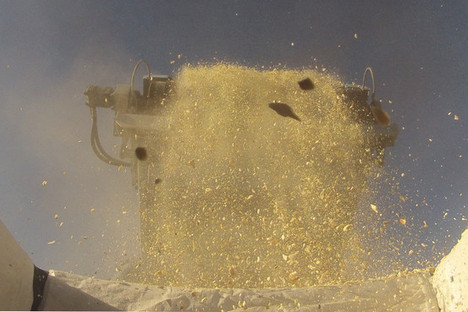 “Crushed ivory falls out of the crusher as the U.S. crushed its six-ton stock of confiscated ivory at the Rocky Mountain Arsenal National Wildlife Refuge . . . .” Source of caption and photo: online version of the WSJ article quoted and cited below.

The higher the price of ivory, the greater the incentive for ivory poachers to kill elephants. The U.S. Fish and Wildlife Service could have put their cache of ivory on the market, thereby increasing the supply, and reducing the price. If they had done so, they would have reduced the incentive of the poachers to poach. (This is basic price theory that I teach in each of my micro-economic principles classes.) Instead they crushed the ivory and thereby doomed some elephants to death, who otherwise could have been saved.

(p. A3) COMMERCE CITY, Colo.–The U.S. government spent the past 25 years amassing contraband ivory in a warehouse here, with pieces ranging from tiny statuettes to full elephant tusks tattooed by intricate carvings. Ultimately, the pile grew to six tons–equivalent to ivory from at least 2,000 elephants.

On Thursday, the stash collected by the U.S. Fish and Wildlife Service was pulverized by an industrial rock crusher as government officials, conservationists from around the world and celebrities gathered to watch the destruction.
The move, which follows similar events in the Philippines and Gabon in recent years, is part of a global effort to combat elephant poaching, on the rise because of growing demand for ivory trinkets in Asia. Proponents argue that crushing the ivory conveys to illegal traffickers and collectors that it has no value unless it is attached to an elephant.
. . .
But critics of the practice said they worry that destroying the coveted commodity, sometimes referred to as “white gold,” could instead create the perception that the world’s remaining ivory is more valuable–and drive poachers to kill more elephants for their tusks. “This could be self-defeating,” said Michael ‘t Sas-Rolfes, an independent conservation economist.
. . .
While praising efforts to preserve elephants, some in conservation circles consider crushing contraband ivory to be an ineffective strategy.
Kirsten Conrad, a wildlife conservation consultant who has studied the Chinese ivory market, said elephants could be better served if sustainably harvested ivory–from elephants that died from natural causes, for example–were regularly offered for sale.
The proceeds would give communities in Africa an incentive to better protect wildlife, and the steady supply would dissuade speculators in China from stockpiling, as she says they are doing now. A kilo of raw ivory can sell for up to $3,000. “We’re losing an elephant every 16 minutes,” she said. “We should look really hard at legal trade.” 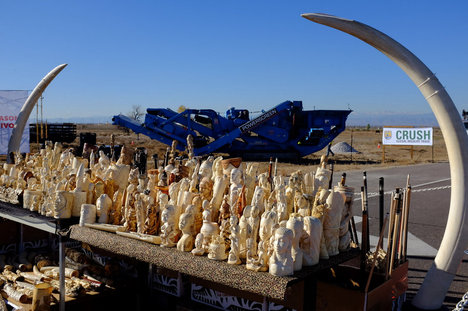 “Ivory on display before the U.S. crushed it in Commerce City, Colo., Thursday. On Thursday the government destroyed nearly six tons of seized contraband ivory tusks and trinkets.” Source of caption and photo: online version of the WSJ article quoted and cited above.