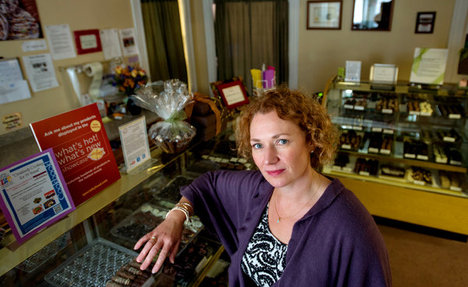 “Erin Calvo-Bacci, the owner of a candy shop, the Chocolate Truffle, in Reading, Mass., lamented the cost of American sugar.” Source of caption and photo: online version of the NYT article quoted and cited below.

(p. A14) READING, Mass. — Inside the Chocolate Truffle candy shop in this Boston suburb are chocolate pizzas, chocolate buffalo wings, even a chocolate wingtip shoe. The owner, Erin Calvo-Bacci, would like to expand her business close to home, but is instead thinking of moving her operations to Canada, where the sugar essential for her products costs far less.

“We are committed to offering locally made affordable products, but the cost of sugar is driving manufacturers out of the country,” Ms. Calvo-Bacci said, echoing other American candy producers, like the maker of Dum Dum lollipops, that are moving jobs to Mexico to take advantage of the lower sugar prices there.
Candy makers say the culprit is the federal sugar program, a combination of import restrictions, production quotas and loan programs dating to the 1930s, all designed to keep the price of American sugar well above that of the world market. Now the program is at the center of an intensifying battle as the House and Senate open formal negotiations this week on a long-delayed farm bill.
The price for one type of sugar, wholesale refined beet sugar, averaged 43.4 cents per pound at Midwest markets last year, the Agriculture Department reported, compared with 26.5 cents per pound for the world refined sugar price.
. . .
. . . sugar producers, bolstered by lawmakers from sugar-beet-producing states like Minnesota and sugarcane states like Florida, have spent an estimated $20 million since 2011 to block efforts to change the program. . . . Small candy makers, bakers and others who have lobbied Congress for lower prices say that taking on the sugar lobby is like taking on Goliath.
“We were no match for the sugar people,” said Judy Hilliard McCarthy, an owner of Hilliard’s House of Candy, a candy maker just outside Boston. Ms. McCarthy said she had made several trips to Washington to lobby on behalf of the industry.
Government and academic studies support claims by candy makers that the sugar program has had an impact on the industry. A widely cited 2006 study by the Commerce Department and a 2011 Iowa State University study found that the price supports had led to job losses among candy makers.
In particular, the Commerce Department study found that three candy-making jobs were lost for each job growing or processing sugar that was saved by higher prices. The Iowa State study found that eliminating price supports and quotas for sugar would create about 20,000 jobs for American food processors, bakeries and candy makers. 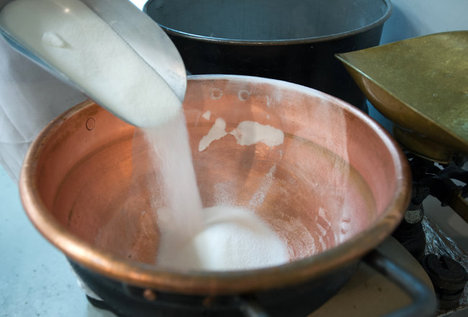 “Sugar was poured to make a confection for Hilliard’s House of Candy, just outside Boston, whose owner has lobbied officials.” Source of caption and photo: online version of the NYT article quoted and cited above.