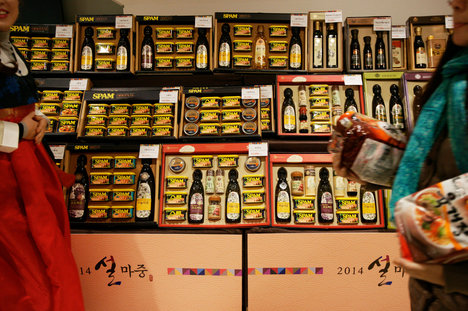 “Spam gift boxes at the Lotte Department Store in Seoul.” Source of caption and photo: online version of the NYT article quoted and cited below.

Often when I explain the concept of an “inferior good” to my micro principles classes, I use the example of Spam, sometimes elaborating that I failed my first attempt to earn the Boy Scouts cooking merit badge, when I was unable to open my can of Spam. I go on to point out that goods that are “inferior” for some people, can be “normal” goods for other people, depending on preferences, and that I had read somewhere that Spam was a treasured gift in South Korea, and hence was probably NOT an inferior good for most South Koreans.
Finally, documentation of my impression:

Yes, Spam. In the United States, the gelatinous meat product in the familiar blue and yellow cans has held a place as thrifty pantry staple, culinary joke and kitschy fare for hipsters without ever losing its low-rent reputation. But in economically vibrant South Korea, the pink bricks of pork shoulder and ham have taken on a bit of glamour as they have worked their way into people’s affections.
“Here, Spam is a classy gift you can give to people you care about during the holiday,” said Im So-ra, a saleswoman at the high-end Lotte Department Store in downtown Seoul who proudly displayed stylish boxes with cans of Spam nestled inside.
. . .
(p. A7) . . . George H. Lewis, a sociologist at the University of the Pacific, noted in a 2000 article in The Journal of Popular Culture that Spam won its “highest” status in South Korea. Here, he observed, Spam not only outranked Coca-Cola and Kentucky Fried Chicken in status, but was given as a gift “on occasions of importance when one wishes to pay special honor and proper respect.”
. . .
“Spam maintains a mythical aura on the Korean market for reasons that escape many,” mused Koo Se-woong, a lecturer of Korean studies at Yale University’s MacMillan Center for International and Area Studies. “Given Spam’s introduction to South Korea through the U.S. military, it enjoyed an association with prosperity and nutritiousness during an earlier era.”
. . .
“To me, Spam was just a tasteful and convenient food that mother used to cook for us,” she said. “The thing about Spam is that it goes marvelously well with kimchi and rice.”