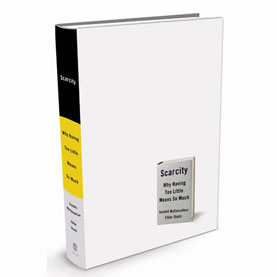 (p. C11) In “Scarcity,” Sendhil Mullainathan and Eldar Shafir offer groundbreaking insights into, among other themes, the effects of poverty on (p. C12) cognition and our ability to make choices about our lives. The authors persuasively show that the mental space–or “bandwidth”–of the poor is so consumed with making ends meet that they may be more likely to lose concentration while on a job or less likely to take medication on time.

The book that Power praises is:
Mullainathan, Sendhil, and Eldar Shafir. Scarcity: Why Having Too Little Means So Much. New York: Times Books, 2013.