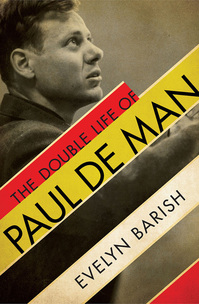 (p. 14) Barish, a retired professor of English at the City University of New York Graduate Center, has devoted many years to tracking the elusive trail of the noted literary scholar who made headlines posthumously in 1988, after a researcher in Belgium discovered the trove of literary criticism he had published in that country’s leading pro-Nazi newspaper during World War II. De Man, who had emigrated to the United States in 1948, earned a doctorate at Harvard in 1960 and went on to a dazzling academic career, forming a generation of devoted disciples. When he died in 1983 at age 64, he was a revered figure. The author of brilliant if difficult essays on modern literature, he had been among the first to embrace deconstruction, the influential theory elaborated by the French philosopher Jacques Derrida. Deconstruction focused on linguistic ambiguity, infuriating critics who viewed it as a dangerous relativism.
. . .
Detractors maintained that despite obvious differences, the two were cut from the same intellectual cloth: The ideas about “undecidability” in language were an elaborate cover-up for past sins. The most hostile critics seized the opportunity to strike a decisive blow against deconstruction, as a doctrine with unavowable antecedents in Nazism.
Now, almost 30 years later, when the theoretical avant-garde has moved on, “The Double Life of Paul de Man” revives the man and his fall. This time, we get a story of the professor not just as a young collaborator, but as a scheming careerist, an embezzler and forger who fled Belgium in order to avoid prison, a bigamist who abandoned his first three children, a deadbeat who left many rents and hotel bills unpaid, a liar who wormed his way into Harvard by falsifying records, a cynic who used people shamelessly. Some of these accusations have been made before (and documented), but Barish develops them and adds new ones. Her conclusion is somber: She places de Man not among the charming scoundrels but among the false “new messiahs” of history.