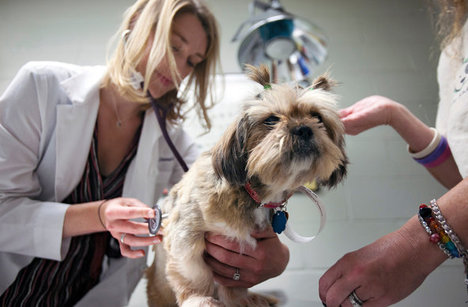 “Erica Moore examined Akyra, a shih tzu, in August before the dog was enrolled in Penn Vet’s canine mammary tumor program. She had surgery there.” Source of caption and photo: online version of the NYT article quoted and cited below.

(p. D6) Akyra’s mammary glands were riddled with tumors, including one the size of a golf ball. She would be hard to place in a home, and the medical care she needed would be expensive. The tumors could be cancerous.

“When my husband called and said they were going to leave one of the dogs behind because she had mammary tumors, I said, ‘No, you’re not!’ ” said Bekye Eckert, 49, a dog lover who lives outside Baltimore and has cared for several animals with mammary cancer.
Ms. Eckert arranged for Akyra to be enrolled in an innovative program at the University of Pennsylvania, where veterinary oncologists are learning about the progression of human breast cancer by treating mammary tumors in shelter dogs.
. . .
Generally, two sets of tumor samples are taken from each dog, one for the pathology lab and one for Dr. Troyanskaya to use for molecular analysis. Astrid, for example, had tumors in seven mammary glands that were mostly benign. The largest proved to be malignant.
Such a large set of samples is a gold mine for Dr. Troyanskaya, who is looking for changes in the expression of a specific gene or group of genes, or pathways linking groups of genes as the tumor becomes malignant.
. . .
In the meantime, stray dogs are getting free cancer treatment that makes it easier to find them permanent homes, and they are promised care for any recurrence. More than 100 dogs have been through the program; several have been adopted by women who also survived breast cancer.
For Akyra, there was good news. She had surgery in August, and veterinarians removed the large tumor and three smaller lesions. The pathology report gave her a clean bill of health: None were cancerous. She was adopted by Beth Gardner, a relocation consultant in Devon, Pa.