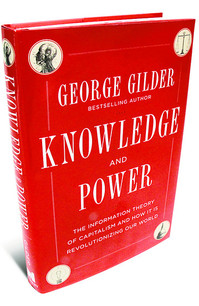 (p. A13) Individuals like Ford and Jobs are key figures in the economic paradigm that George Gilder lays out in “Knowledge and Power.” He calls for an “information theory of capitalism” in which the economy is driven by a dynamic marketplace, with information widely (and freely) distributed. The most important feature of such an economy, Mr. Gilder writes, is the overthrow of “equilibrium,” and the most important actors are inventors and entrepreneurs whose breakthrough ideas are responsible for “everything useful or interesting” in commercial life.
. . .
Aspiring owners shouldn’t look to “Knowledge and Power” for practical advice on starting a company, but Mr. Gilder’s case for the central role of entrepreneurship might boost their morale. Certainly his argument could not be more timely. Census Bureau data show that startups were responsible for nearly all new job creation from 1996 to 2009. Yet entrepreneurship itself (as measured by new business formation) has been stagnant for about two decades. Thus the important question for America’s future may well be, as Mr. Gilder says, “how we treat our entrepreneurs.” He persuasively shows that creating a more supportive climate for entrepreneurs–by clearing away burdensome regulations and freeing information from its current imprisonment–will result in a more prosperous and vigorous society, creating not only more jobs but more Jobs.

The book under review is:
Gilder, George. Knowledge and Power: The Information Theory of Capitalism and How It Is Revolutionizing Our World. Washington, D.C.: Regnery Publishing, Inc., 2013.