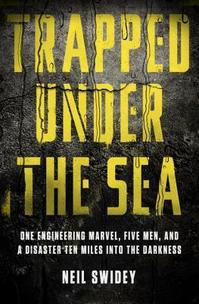 (p. C9) Boston Harbor’s filth is legendary. It was mock-celebrated in the 1966 song “Dirty Water.” The city’s water-treatment plants were hopelessly inadequate, and barely treated sewage had been pouring into the harbor for decades.
. . .
The Deer Island Sewage Treatment Plant was supposed to solve these problems. Begun in 1990, the $3.8 billion facility would process human and industrial waste on a small island in Boston Harbor and then send it through a 9.5-mile tunnel into the deep waters of the Atlantic. Fifty-five vertical pipes called risers spurred off the tunnel’s final section to further diffuse waste before releasing it into the sea. Temporary safety plugs, likened to giant salad bowls, had been placed near the bottom of each riser to keep water from seeping in before construction was complete.
These plugs were a source of conflict between the tunnel’s owner, the Massachusetts Water Resources Authority (MWRA), and the company they hired to build it, Kiewit, “the Omaha-based construction giant” that, Mr. Swidey notes, “had built more miles of the U.S. highway system than any other contractor.” The director of MWRA, Doug MacDonald, had left a job as a partner in a Boston law firm to take over the authority, a behemoth of 1,700 employees and, at the peak of harbor cleanup, an additional 3,000 construction workers. Mr. MacDonald’s job included mollifying various parties who disagreed about how the Deer Island project would reach completion: Kiewit; the tunnel’s designers, mostly out of the picture by 1998; ICF Kaiser Engineers, hired by MWRA to protect its interests and act as Mr. MacDonald’s eyes and ears; the union “sandhogs” who bored out 2.4 million tons of rock to create the tunnel; the Occupational Safety and Health Administration, ostensibly looking out for worker safety but seeming more interested in handing out fines; and, though federal funds for harbor cleanup had long since dried up, “a bow-tied federal judge who served as the cleanup project’s robed referee, threatening stiff fines or worse if the deadlines he imposed were not met.”
. . .
The problem weighed most heavily on Kiewit. The firm was contractually obligated to deliver on time, subject to late-fee penalties of $30,000 a day, and to cover cost overruns. More, Kiewit had fronted the construction costs and would only be paid by selling the tunnel, piece by piece, to MWRA. The contract further obligated Kiewit to provide “lighting and ventilation (or breathing apparatus) for the personnel” that pulled the plugs but, in what seemed a senseless conflict, mandated that the plugs “could be removed only after the tunnel was completed,” writes Mr. Swidey, “meaning after the sandhogs had cleared out, taking their extensive ventilation, transportation, and electrical systems with them.”
Kiewit protested that clearing the tunnel of its life-sustaining infrastructure would make “the risk of catastrophe [to the workers pulling the plugs] . . . exponentially higher !” They offered several sound alternatives. In response, ICF Kaiser accused them of just wanting their payday. After a “year-long memo war,” Kiewit capitulated, cleared the tunnel and hired a commercial dive team to go into a pitch-black airless tube.

For the full review, see:
NANCY ROMMELMANN. “BOOKS; One Mile Down, Ten Miles Out; Their oxygen was starting to get thin. On the verge of passing out, Hoss radioed back to the Humvees. The reply was an expletive, and the line went dead.” The Wall Street Journal (Sat.,March 15, 2014): C9.
(Note: ellipses between paragraphs, added; ellipsis inside last paragraph, in original.)
(Note: the online version of the review has the date March 14, 2014, and has the title “BOOKSHELF; Book Review: ‘Trapped Under the Sea’ by Neil Swidey; In 1999, five deep-sea welders had to traverse a tunnel beneath Boston Harbor with no breathable air, no light and no chance for rescue should things go horribly wrong.” )

The book under review is:
Swidey, Neil. Trapped under the Sea: One Engineering Marvel, Five Men, and a Disaster Ten Miles into the Darkness. New York: Crown Publishers, 2014.