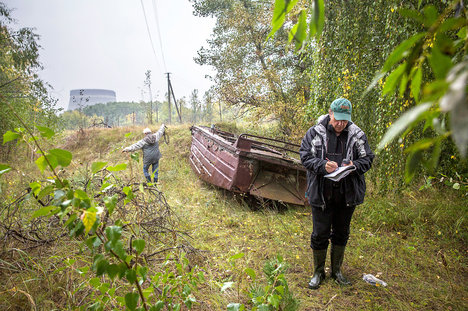 With an unfinished cooling tower at the Chernobyl plant in the background, Timothy Mousseau, right, and an assistant set out microphones to study bats in the contaminated area.” Source of caption and photo: online version of the NYT article quoted and cited below.

(p. D1) In dozens of papers over the years Dr. Mousseau, his longtime collaborator, Anders Pape Moller of the National Center for Scientific Research in France, and colleagues have reported evidence of radiation’s toll: . . .

(p. D2) But their most recent findings, published last month, showed something new. Some bird species, they reported in the journal Functional Ecology, appear to have adapted to the radioactive environment by producing higher levels of protective antioxidants, with correspondingly less genetic damage. For these birds, Dr. Mousseau said, chronic exposure to radiation appears to be a kind of “unnatural selection” driving evolutionary change.
. . .
The findings . . . suggest that in some cases radiation levels might have an inverse effect — birds in areas with higher radiation exposure may show greater adaptation, and thus less genetic damage, than those in areas with lower radiation levels.
Like almost all of the studies by Dr. Mousseau and his colleagues, the latest one takes advantage of the unique circumstances of the Chernobyl exclusion zone as a real-world laboratory. “Nature is a much more stressful environment than the lab,” Dr. Mousseau said.