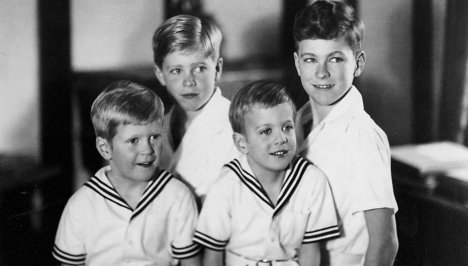 “The Koch brothers, from left: William, Charles, David and Frederick.” Source of caption and photo: online version of the NYT review quoted and cited below.

(p. 12) “Sons of Wichita” may strike some readers as surprisingly pro-Koch.  . . . [Schulman] grants Charles and David two key concessions: They have sincere political views that go beyond being just a cover for their companies’ interest in lower taxes and fewer regulations, and many of their political activities have been right out in the open, rather than lurking in the shadows. He seems to be almost in awe of Charles, the most mysterious of the brothers, who runs Koch Industries by a system he devised called Market-Based Management. Summarizing, but not dissenting from, the views of Charles’s employees, Schulman calls him “a near-mythic figure, a man of preternatural intellect and economic prowess,” adding: “He is unquestionably powerful, but unfailingly humble; elusive, but uncomplicated; cosmopolitan, yet thoroughly Kansan.” It’s noteworthy, Schulman argues, that for decades the Koch family was definitely not welcome in the Republican Party. That they came to stand for Republicanism, at least in the minds of liberals, in 2010 and 2012 is testament to their persistence, to the weakening of the traditional party structures and to their success in making libertarianism a mainstream rather than a fringe ideology. “It’s a brilliant, extraordinary accomplishment,” Schulman quotes Rob Stein of the liberal Democracy Alliance as saying about the Kochs’ rise to influence.
. . .
Even the Tea Party movement is not entirely dependent on intravenous feeding from the Kochs or that other favorite liberal villain, Fox News. And elements of Koch-style libertarianism, connected to the interests of major donors, now live within the Democratic Party too — not just on social issues like same-sex marriage, but on economic and regulatory ones too. “Sons of Wichita” reminds us that political outcomes depend far more on ideas and organization, and the energy and persistence devoted to them, than they do on the balance of power between good guys and bad guys.

The book under review is:
Schulman, Daniel. Sons of Wichita: How the Koch Brothers Became America’s Most Powerful and Private Dynasty. New York: Grand Central Publishing, 2014. 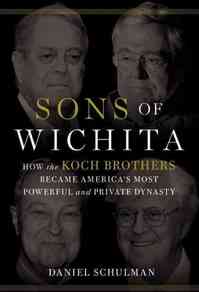