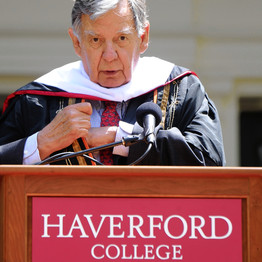 “William Bowen, speaking at Haverford College on Sunday [May 18, 2014], criticized students who staged a protest over another scheduled speaker.” Source of caption and photo: online version of the WSJ article quoted and cited below.

(p. A3) William Bowen, a former president of Princeton University, criticized students who had objected to Haverford’s invitation to Robert Birgeneau, a former chancellor of the University of California, Berkeley, to speak at commencement.
. . .
“He is a person of consequence,” Mr. Bowen said. He said he told students, “If you expect to agree with commencement speakers on everything, then who will you get to speak? Someone totally boring.” He added that he also called the subset of students who had objected to Dr. Birgeneau “immature and arrogant.”
. . .
Phil Drexler, president of the Haverford Students’ Council, said some in the audience were upset but others gave a standing ovation. “I felt validated by the speech because I had wanted to hear Dr. Birgeneau talk,” said Mr. Drexler, a graduating physics major. On the plus side, he added, he likely won’t soon forget his commencement.
A number of commencement speeches have been derailed by student and faculty protests this graduation season. Christine Lagarde, managing director of the International Monetary Fund, withdrew last week from speaking at Smith College. Similar outcries foiled engagements by former National Security Adviser Condoleezza Rice at Rutgers University and human-rights activist Ayaan Hirsi Ali at Brandeis University.

For the full story, see:
NATHAN KOPPEL. “Commencement Speaker Blasts Students on Protest.” The Wall Street Journal (Mon., May 19, 2014): A3.
(Note: ellipses, and bracketed date, added.)
(Note: the online version of the story has the date May 18, 2014, and had the title “Haverford Speaker Bowen Criticizes Students Over Protests.”)