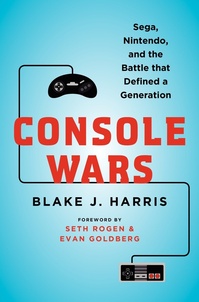 (p. C10) “Console Wars” tells how Sega, an unremarkable Japanese manufacturer of games played in arcades, came out of nowhere to challenge Nintendo for dominance of the videogame world in the first half of the 1990s. Nintendo, which had revived the stagnant home videogame category a few years earlier, had something close to a monopoly in 1990 and behaved accordingly, dictating terms to game developers and treating retailers as peons. Sega, in Mr. Harris’s telling, was a disruptive force in a highly concentrated market, introducing more advanced gaming technology, toppling Nintendo from its perch and becoming the largest seller of home videogame hardware in the U.S. by late 1993.

Mr. Harris’s hero is a former Mattel executive named Tom Kalinske, who became president of Sega of America, then a small subsidiary, in 1990. Mr. Kalinske assembled a team of crack marketers who would not have gone near Sega but for his reputation and persuasiveness. Within a year and a half, according to Mr. Harris, Mr. Kalinske’s leadership, along with a new gaming system called Genesis and a marketing assist from a mascot named Sonic the Hedgehog, made Sega the U.S. market leader in videogames.
And then, after only three years at the top, Sega fell from its pedestal. Sega’s management in Japan, suffering mightily from not-invented-here syndrome, rejected Mr. Kalinske’s proposals to collaborate with Sony and Silicon Graphics on new gaming systems. Instead, over his objections, Sega pushed out its ill-conceived Saturn game console in 1995. While Saturn flopped, Sony struck gold with its PlayStation; Silicon Graphics sold its chip with amazing graphics capabilities to Nintendo; and the game, so to speak, was over.
. . .
The author admits he has taken liberties: “I have re-created the scenes in this book using the information uncovered from my interviews, facts gathered from supporting documents, and my best judgment as to what version most closely fits the historical record,” he writes. The result is more a 558-page screenplay than a credible work of nonfiction.

The book under review is:
J., Harris Blake. Console Wars: Sega, Nintendo, and the Battle That Defined a Generation. New York: HarperCollins Publishers, 2014.