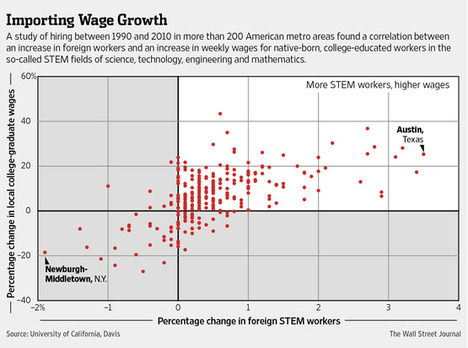 (p. A6) “A lot of people have the idea there is a fixed number of jobs,” said . . . , Giovanni Peri of the University of California, Davis. “It’s completely turned around.”

Immigrants can boost the productivity of the overall economy, he said, “because then the pie grows and there are more jobs for other people as well and there’s not a zero-sum trade-off between natives and immigrants.”
Mr. Peri, along with co-authors Kevin Shih at UC Davis, and Chad Sparber at Colgate University, studied how wages for college- and noncollege-educated native workers shifted along with immigration. They found that a one-percentage-point increase in the share of workers in STEM fields raised wages for college-educated natives by seven to eight percentage points and wages of the noncollege-educated natives by three to four percentage points.
Mr. Peri said the research bolsters the case for raising, or even removing, the caps on H-1B visas, the program that regulates how many high-skilled foreign workers employers can bring into the country.