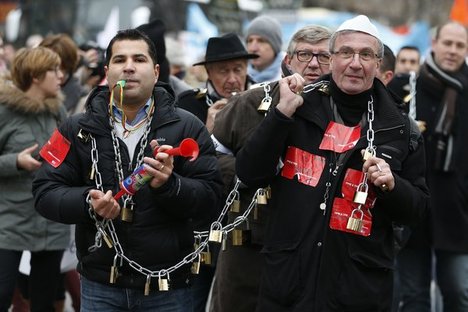 “Protesting business owners in Paris brandished locks and chains to signify the constraints they said the government imposed on French businesses.” Source of caption and photo: online version of the NYT article quoted and cited below.

(p. B3) PARIS — They jammed the boulevards, blowing whistles, tossing firecrackers, wearing locks and chains around their necks, and shouting into megaphones: “Enough is enough!”

In France, where protest marches are a well-practiced tradition, it is usually workers who take to the streets. But in a twist on Monday, thousands of French bosses demonstrated in Paris and Toulouse, the opening act in a weeklong revolt against government regulations and taxes that they say are straitjacketing companies, discouraging hiring and choking the economy.
“We feel like we’re being taken hostage,” said Laurence Manabre, owner of a home-maintenance business that has 28 workers — but could employ many more, she said, if not for onerous government-imposed labor rules.
Ms. Manabre marched with the throng toward the Finance Ministry, brandishing a bronze lock, a symbol that hundreds of other bosses wore to signify the constraints they said the Socialist government imposed on French businesses. “Between regulations, taxes, new laws, and razor-thin margins,” she said, “we’re being crushed little by little.”
. . .
. . . there are . . . entrenched parts of the French labor code, which employers say make it a difficult, lengthy process to lay off employees, and make bosses reluctant to take on new workers, especially with permanent contracts.
“France has high unemployment,” Ms. Manabre said. “But the French labor code is incomprehensible, and it just keeps getting more complex. How can I possibly hire more people?”
. . .
Mr. Roland has 35 employees, and his son is supposed to take over the business when he retires. But now his son is thinking of leaving the country, Mr. Roland said, because “France doesn’t seem to have a future, and the conditions for entrepreneurs are difficult.”
Mr. Roland said he did not plan to hire more workers, out of concern that coming regulations would menace his already-thin profit margins.