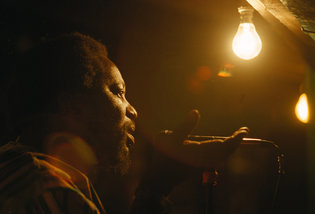 Chenjerai Hove speaking in 2001. Source of photo: online version of the NYT obituary quoted and cited below.

(p. B7) Chenjerai Hove, one of Zimbabwe’s leading writers, whose poems and novels powerfully evoked the struggles of ordinary village folk before and after independence, died on July 12 [2015] in Stavanger, in southwestern Norway.
. . .
Writing primarily in English, but also in his native Shona, Mr. Hove vividly depicted the lives of the humblest of his countrymen caught up in the guerrilla war waged against British colonial rule and, after independence in 1980, dealing with the hopes and disappointments of living under Robert Mugabe’s rule.
. . .
In newspaper columns and essays, Mr. Hove painted a bleak picture of post-independence Zimbabwe and sharply criticized the Mugabe regime. The government retaliated with a campaign of intimidation that drove him into exile in 2001 — first to France, then to the United States and finally to Norway, where the International Cities of Refuge Network, an organization that helps persecuted writers, placed him as a guest writer in Stavanger.
“Chenjerai was a national treasure,” Wilf Mbanga, the editor of the British-based weekly The Zimbabwean, told The Independent of London. “It is such a tragedy that one of Zimbabwe’s best-known writers was hounded out of his country and forced to live — and die — in exile. He was never afraid to speak the truth, no matter however painful that might be.”
. . .
“I try to write in order to fight the decay called silence, to communicate with myself so as to search for the ‘other’ in me,” he wrote in 2007 in an essay for the collection “Writers Under Siege: Voices of Freedom From Around the World.”
He continued: “What keeps me going is that every new word and metaphor I create is a little muscle in the act of pushing the dictatorship away from our real and imaginative existence.”