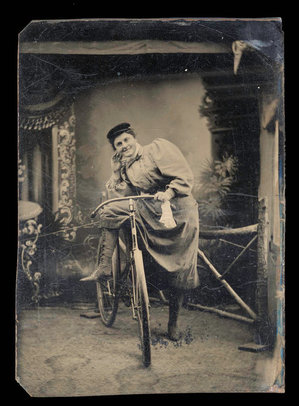 “A portrait from the 1890s at the Smithsonian Institution’s National Museum of American History. Susan B. Anthony said cycling did more to emancipate women than anything else in the world.” Source of caption and photo: online version of the NYT article quoted and cited below.

(p. D1) . . . , Twain promoted the new sport of cycling with characteristic rhubarb tartness. “Get a bicycle,” he urged readers. “You will not regret it, if you live.”
. . .
The full-bore bicycle fever was brief, and by the early 20th century it had given way to fascination with the automobile. Yet, as a new exhibit at the Smithsonian Institution’s National Museum of American History makes clear, the impact of the bicycle on the nation’s industrial, cultural, emotional and even moral landscape has been deep and long lasting.
In addition to air-filled rubber tires, we can thank the bicycle for essential technologies like ball bearings, originally devised to reduce friction in the bicycle’s axle and steering column; for wire spokes and wire spinning generally; for differential gears that allow connected wheels to spin at different speeds.
And where would our airplanes, tent poles and lawn furniture be without the metal tubing developed to serve as the bicycle frame? “The hollow steel tube is a great form,” said Jim Papadopoulos, an assistant teaching professor of mechanical and industrial engineering at Northeastern University in Boston. “It’s tremendously structurally efficient, light and strong, and it came into being for the bicycle.”
. . .
(p. D4) Bicycles also gave birth to our national highway system, as cyclists outside major cities grew weary of rutted mud paths and began lobbying for the construction of paved roads. The car connection goes further still: Many of the bicycle repair shops that sprang up to service the wheeling masses were later converted to automobile filling stations, and a number of pioneers in the auto industry, including Henry Ford and Charles Duryea, started out as bicycle mechanics. So, too, did the Wright brothers.
“The pre-story is so important,” said Eric S. Hintz, a historian with the Smithsonian’s Lemelson Center for the Study of Invention and Innovation. “You don’t get automobiles unless you first have bikes.”
. . .
By the mid-1890s, some 300 American companies were churning out well over a million bicycles a year, making the safety bike one of the first mass-produced items in history. Among the most exuberant customers were women, who discovered in the bicycle a sense of freedom they had rarely experienced before.
. . .
Bicycles allowed young men and women to tool around the countryside unsupervised, and relationships between the sexes grew more casual and spontaneous. With a bicycle at her disposal, a young woman could also venture forth in search of work.
Small wonder that Susan B. Anthony said of cycling, “I think it has done more to emancipate women than any one thing in the world.”