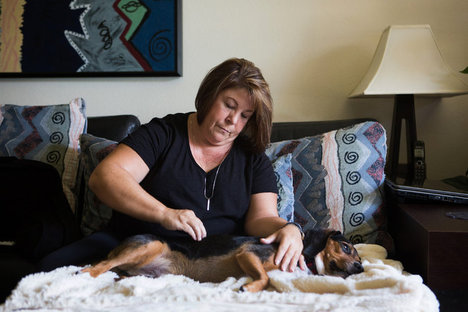 “Grace Granatelli, a certified canine massage therapist. In 2013, Arizona’s Veterinary Medical Examining Board demanded that she close up shop for medically treating animals without a veterinary degree.” Source of caption and photo: online version of the NYT article quoted and cited below.

(p. B1) SCOTTSDALE, Ariz. — “I usually start behind the neck,” Grace Granatelli said from her plump brown sofa. “There’s two pressure points back behind the ears that help relax them a little bit.” In her lap, she held the head of Sketch, her mixed beagle rat terrier, as her fingers traced small circles through his fur.

Ms. Granatelli, whose passion for dogs can be glimpsed in the oil portrait of her deceased pets and the bronzed casts of their paws, started an animal massage business during the recession after taking several courses and workshops. Her primary form of advertising was her car, with its “K9 RUBS” license plate and her website, Pawsitive Touch, stenciled onto her rear window.
But in 2013, Arizona’s Veterinary Medical Examining Board sent her a cease-and-desist order, demanding that she close up shop for medically treating animals without a veterinary degree. If not, the board warned, every Swedish doggy massage she completed could cost her a $1,000 fine.
To comply with the ruling and obtain a license, Ms. Granatelli would have to spend about $250,000 over four years at an accredited veterinary school. None require courses in massage technique; many don’t even offer one.
. . .
(p. B5) The Obama administration and the conservative political network financed by the Koch brothers don’t agree on much, but the belief that the zeal among states for licensing all sorts of occupations has spiraled out of control is one of them. In recent months, they have collaborated with an array of like-minded organizations and political leaders in a bid to roll back licensing rules.
. . .
. . . the current mishmash of requirements is too often “inconsistent, inefficient, and arbitrary,” a White House report concluded last year. Many of them, the report said, have little purpose other than to protect those already in the field from further competition.
. . .
Only rarely are licensing requirements removed. Last month, though, Arizona agreed to curb them for yoga teachers, geologists, citrus fruit packers and cremationists.
But dozens more professions escaped the ax. “Arizona is perceived as a low-regulatory state, but this was the most difficult bill we worked on this session,” said Daniel Scarpinato, a spokesman for the Republican governor, Douglas Ducey.
Licensing boards are generally dominated by members of the regulated profession. And in Arizona, more than two dozen of the boards are allowed to keep 90 percent of their fees, turning over a mere 10 percent of the revenue to the state.
“They use that money to hire contract lobbyists and P.R. people,” Mr. Scarpinato said. “This is really a dark corner of state government.”
They are often joined in their campaign by lobbyists from industry trade associations and for-profit colleges, which sell the required training courses.