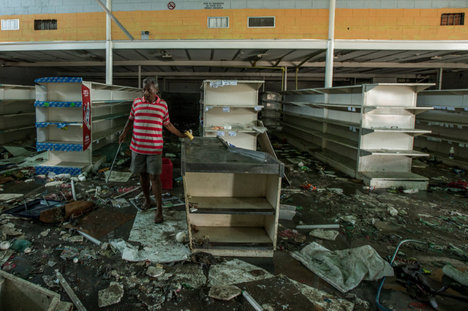 “A man searched for food last week at a grocery store in Cumaná that had been looted.” Source of caption and photo: online version of the NYT article quoted and cited below.

(p. A1) CUMANÁ, Venezuela — With delivery trucks under constant attack, the nation’s food is now transported under armed guard. Soldiers stand watch over bakeries. The police fire rubber bullets at desperate mobs storming grocery stores, pharmacies and butcher shops. A 4-year-old girl was shot to death as street gangs fought over food.
Venezuela is convulsing from hunger.
Hundreds of people here in the city of Cumaná, home to one of the region’s independence heroes, marched on a supermarket in recent days, screaming for food. They forced open a large metal gate and poured inside. They snatched water, flour, cornmeal, salt, sugar, potatoes, anything they could find, leaving behind only broken freezers and overturned shelves.
And they showed that even in a country with the largest oil reserves in the world, it is possible for people to riot because there is not enough food.
In the last two weeks alone, more than 50 food riots, protests and mass looting have erupted around the country. Scores of businesses have been stripped bare or destroyed. At least five people have been killed.
. . .
(p. A3) It has not always been clear what provokes the riots. Is it hunger alone? Or is it some larger anger that has built up in a country that has crumbled?
Inés Rodríguez was not sure. She remembered calling out to the crowd of people who had come to sack her restaurant on Tuesday night [June 14, 2016], offering them all the chicken and rice the restaurant had if they would only leave the furniture and cash register behind. They balked at the offer and simply pushed her aside, Ms. Rodríguez said.
“It is the meeting of hunger and crime now,” she said.

For the full story, see:
NICHOLAS CASEY. “Pillaging by Venezuelans Reveals Depth of Hunger.” The New York Times (Mon., JUNE 20, 2016): A1 & A3.
(Note: ellipsis, and bracketed date, added.)
(Note: the online version of the story has the date JUNE 19, 2016, and has the title “Venezuelans Ransack Stores as Hunger Grips the Nation.”)