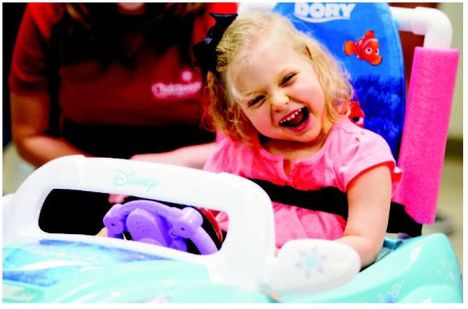 “Madeline Hauschild, 3, is thrilled to be at the wheel of her modified toy car at the UNMC Student Life Center on Wednesday [August 10, 2016]. Cars such as Madeline’s enable children with little mobility to get around without feeling reliant on parents or siblings.” Source of caption and photo: online version of the Omaha World-Herald article quoted and cited below.

(p. 1B) Now Madeline Hauschild will be able to drive a toy car just like her brother.

On Wednesday [August 10, 2016] Madeline, 3, received a battery-operated toy car modified so that she could sit in it and make it go forward by pushing a large button on the steering wheel. Madeline, who has cerebral palsy, was one of six small children who received cars through a program overseen by the University of Nebraska Medical Center and Children’s Hospital & Medical Center.
. . .
The cars give children with little mobility the opportunity to play, explore and socialize rather than feeling stuck and dependent on parents or siblings to move them around.
. . .
(p. 5B) Cerebral palsy is a disorder that causes movement, posture and other developmental problems. Among Madeline’s challenges: She can’t walk or bear any weight on her legs.
Madeline, of Syracuse, Nebraska, smiled and pounded the button, giving her a herky-jerky ride.
. . .
“Is that fun?” Madeline’s mother, Kelly Hauschild, asked as her daughter enjoyed the erratic drive in a room at UNMC’s Student Life Center. “You do like it, don’t you?”
. . .
“I loved seeing her be able to operate it all by herself, and her smiles,” Hauschild said.