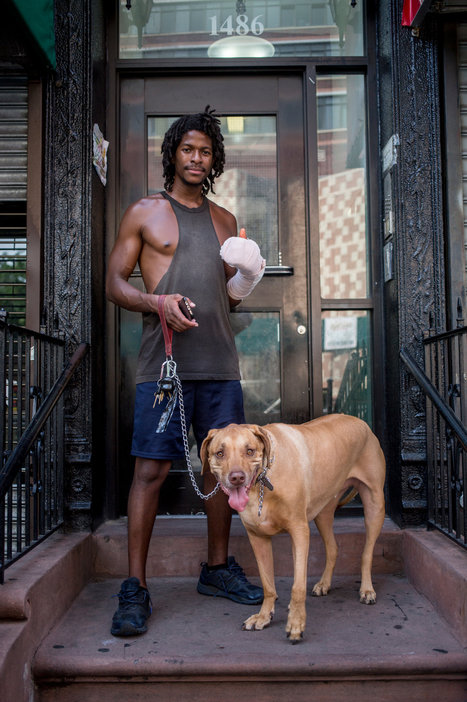 “Raul Cordero with his Rhodesian ridgeback, Viuty. Mr. Cordero operates a dog-care business in East Harlem that appears to run afoul of city rules regarding the care of pets for pay in homes.” Source of caption and photo: online version of the NYT article quoted and cited below.

(p. A18) Raul Cordero and his Rhodesian ridgeback, Viuty, often have canine houseguests overnight at their East Harlem home, part of Mr. Cordero’s dog-care business, for which he carries special petsitter’s insurance that costs about $800 a year.
Yet despite Mr. Cordero’s efforts to do everything by the book, he was shocked to discover that his petsitting business — and in fact, any of the ubiquitous, your-home-or-mine variety — is against New York City’s rules.
According to long-established but little-noticed regulations of the city’s Department of Health and Mental Hygiene, anyone offering petsitting for pay must be licensed to board animals, and do so in a permitted kennel. Running such a kennel out of a home is not allowed in the city.
. . .
The newcomers are large, app-based pet-care businesses, with names like Wag and Rover, that operate in a similar style to Airbnb, enabling New Yorkers to open their apartments and dog beds as à la carte dog hostels.
. . . Rover and its ilk have run afoul of similar stipulations in places like California and Colorado, and John Lapham, Rover’s general counsel, said that Rover was currently embroiled in similar concerns in several cities in New Jersey.
. . .
The department’s rule “deprives dog owners of the most obvious, safe and affordable care,” Mr. Lapham said.
“And it deprives sitters of the opportunity to make ends meet,” he said.
Mr. Lapham noted that in New York City, babysitting, for example, is permitted, no license necessary.
. . .
. . . to Mr. Cordero, 27, regulating small-time dogsitters like him and his Rhodesian sidekick feels like government overreach. Petsitting “is like taking care of you own pet in your house,” he said, adding: “So if you have a license, that means you are certified to feed a dog or a cat? That’s crazy.”