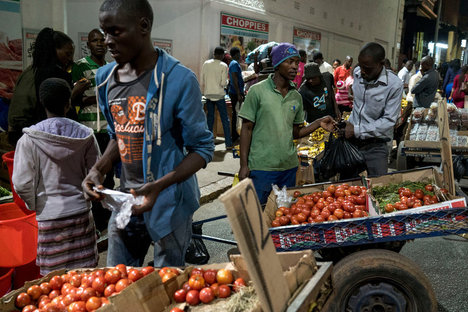 “In Harare, unauthorized street vendors wait until dark to avoid the police. The government says 95 percent of the work force is involved in the informal economy.” Source of caption and photo: online version of the NYT article quoted and cited below.

I remember my Wabash College economics professor, Ben Rogge, telling us that during one of his visits to Brazil, many decades ago, he asked an entrepreneur how the Brazilian economy managed to grow in spite of the heavy government regulations. With a smile, the entrepreneur told Ben: “We grow at night, while the government sleeps.”

(p. 6) HARARE, Zimbabwe — Dusk falls and thousands of vendors fan out across central Harare. Through the night, they hawk their wares — vegetables, clothes, kitchen utensils, cellphones — from carts, wheelbarrows or even the pavement, transforming the city’s staid business district into a giant, freewheeling village market.

On Robert Mugabe Road, around the corner from the city’s remaining colonial-era luxury hotel, the Meikles, Victor Chitiyo has sold dress shirts since losing his job as a machine operator at a textile factory several years ago.
“Since then, I’ve never been employed,” Mr. Chitiyo, 38, said under the dim light of a street lamp. “If the economy improves, I’d want to be employed at a company again. But I don’t think that will happen. It’s been a long time since we were optimistic in Zimbabwe.”
Harare’s night market is the most visible evidence of Zimbabwe’s swelling informal economy, which the government estimates now employs all but a small share of the country’s work force.
Even as Zimbabwe’s government, banks, listed companies and other members of the formal economy lurch from one crisis to another, the thriving informal economy of street vendors, traders and others unrepresented in official statistics helps keep the country afloat. For the government of President Robert Mugabe, that parallel economy is both a source of stability — and a potential challenge.
Once one of Africa’s most advanced economies, Zimbabwe has rapidly deindustrialized and shed formal wage-paying jobs, forcing millions like Mr. Chitiyo to hustle on the streets in cities and towns.
From 2011 to 2014, the percentage of Zimbabweans scrambling to make a living in the informal economy shot up to an astonishing 95 percent of the work force from 84 percent, according to the government. And of that small number of salaried workers, about half are employed by the government, including patronage beneficiaries with few real duties.
. . .
The government has occasionally cracked down — sometimes violently — on the street vendors, who are not licensed, describing their activities, near the seat of government and businesses, as an eyesore. Some of the vendors have also staged protests against Mr. Mugabe’s rule.
But the government mostly turns a blind eye, clearly calculating that a permanent crackdown on the livelihoods of an increasing number of its citizens would result in greater political instability. According to an unspoken rule, the street vendors are allowed to operate only after dark on weekdays and starting in late afternoon on weekends.
“If I come too early, the police will take my wares away and I’ll be broke,” said Norest Muza, 28, who sold popcorn and chips while carrying her 2-year-old son on her back. “Evenings, the police don’t come.”
Many of the street vendors arrive in Harare’s business district at dusk and spend the night on the streets before going home at dawn with the morning’s first taxis and buses.
. . .
Mr. Mugabe’s violent seizure of white-owned farms starting in 2000 precipitated a decline in manufacturing and a process of deindustrialization. Manufacturing peaked in 1992, accounting for about 30 percent of the gross domestic product. Now it is 11 percent and declining.
. . .
With the government now strictly controlling the transfer of dollars outside Zimbabwe, companies dependent on trade are finding it increasingly difficult to import critical goods.
“We have companies scaling down or discontinuing certain lines that are heavy on import requirements,” said Busisa Moyo, president of the Confederation of Zimbabwe Industries.
. . .
As the formal economy keeps shrinking, more and more people have been crowding the area where Mr. Chitiyo sells shirts on Robert Mugabe Road.
Across the street, a girl’s voice was crying, “Twenty-five cents for a cob!” It belonged to Tariro Dongo, 13, on her first evening working as a street vendor. It was past 9 p.m. Tariro said she was good in school and wanted to become a teacher.
She had bought 20 corn cobs for $2 near her home in Epworth, a poor township outside Harare. If she sold everything, her profit, after transportation, would amount to a couple of dollars. Sitting on a black bucket and fanning the coals in a small charcoal burner with a piece of cardboard, Tariro roasted the cobs.
She was happy with the money she had made on her first day, Tariro said.
“Twenty-five cents,” she cried. “One cob left!”

For the full story, see:
NORIMITSU ONISHI and JEFFREY MOYO. “Trade on the Streets, and Off the Books, Keeps Zimbabwe Afloat.” The New York Times, First Section (Sun., MARCH 5, 2017): 6.
(Note: ellipses added.)
(Note: the online version of the story has the date MARCH 4, 2017, and has the title “Trade on Streets, and Off Books, Keeps Zimbabwe Afloat.”)