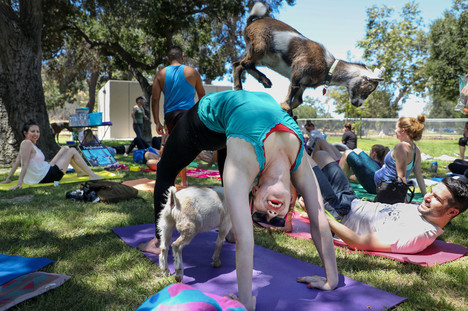 “Goat yoga has spread nationwide since last year. Practitioners in Glendale, Calif., in May.” Source of caption and photo: online version of the WSJ article quoted and cited below.

(p. A1) WASHINGTON–Young goats have on occasion grazed in the Historic Congressional Cemetery, deployed to keep down brush. A yoga instructor has been holding weekly classes in the chapel.

Goats and yoga go together, as any modern yogi knows. So, cemetery staff proposed this spring, why not combine them and bring inner peace to all on the grounds?
“I asked the farmer if there’s any harm to the goats doing yoga,” says Kelly Carnes, who teaches the discipline on the cemetery grounds. “She said quite the opposite–the baby goats just love to interact with humans.”
Gruff was the response from District of Columbia officials. District policy, they decreed, prohibited the human-animal contact goat yoga presented: “At this time the request for the event with the inclusion of baby goats has been denied.”
. . .
(p. A12) This spring at the Congressional Cemetery, Ms. Carnes read about goat yoga and raised the idea with participants in her “yoga mortis” classes at the cemetery. They were “crazy to try it,” she says.
She spoke with Paul Williams, president of the nonprofit that manages the cemetery, about trying it with the goats they had twice hired over the past several years to eat down unwanted plants.
The cemetery planned to hold goat classes in a pen in a grassy area. In June, Mr. Williams sought permission from the health department.
The “no” came that month. The capital’s health code, says Dr. Vito DelVento, manager of the District of Columbia Department of Health’s animal-services program, bans animals beyond common household pets from within district limits.
. . .
Then there’s Washington’s “no touch” policy barring direct contact between humans and animals beyond household pets.
“Baby goats are probably one of the most fun animal species–they are a blast,” says Dr. DelVento, who has farm animals outside the District and has raised goats. “But the fact that we have baby goats jumping on people and interacting with people obviously violates our ‘no touch’ policy.”
Mr. Williams says he will try again next year when Mrs. Bowen has a fresh herd of kids. He will seek a no-touch-policy exemption.
“We’re really trying to offer a service,” says Mrs. Bowen, “that is good for people’s mental health and physical health.”