(p. A13) T.N. Pandit, an Indian anthropologist who visited North Sentinel several times between 1967 and 1991, said their hostility is simple: They want to be left alone.
“They are not wanting anything from you. We are coming to them,” he said. “They suspect that we have no good intentions. That’s why they are resisting.”
. . .
In the years since India won independence from the British, groups of anthropologists have tried to study them.
But no one has managed to get through. Several times, Mr. Pandit said, the Sentinelese have turned their backs on anthropologists and squatted down, as if they were defecating.

For the full story, see:
Kai Schultz, Hari Kumar and Jeffrey Gettleman. “‘Tribe That Killed American Has History of Guarding Island’s Isolation.” The New York Times (Friday, Nov. 23, 2018): A13.
(Note: ellipsis added.)
(Note: the online version of the story has the date Nov. 22, 2018, and has the title “Sentinelese Tribe That Killed American Has a History of Guarding Its Isolation.”)

(p. B3) Add Bill Gates to the list of executives whose businesses have been ensnared by the Trump administration’s battle with China over technology and trade.
The tech tycoon and philanthropist said in an essay posted late last week that a nuclear-energy project in China by a company he co-founded called TerraPower LLC is now unlikely to proceed because of recent changes in U.S. policy toward China. That leaves TerraPower, which had been working on the China project for more than three years, scrambling for a new partner and uncertain where it might be able to run a pilot of the nuclear reactor it has been developing, according to company officials.
. . .
Mr. Gates, in a year-end essay posted on his personal website on Saturday [December 29, 2018], said TerraPower might be able to build its nuclear-reactor pilot project in the U.S., but only if there are changes to regulation. The Microsoft Corp. co-founder said he intends to advocate for those changes in 2019 because he sees nuclear power as “the only carbon-free, scalable energy source that’s available 24 hours a day.”
“The world needs to be working on lots of solutions to stop climate change,” he wrote. “Advanced nuclear is one, and I hope to persuade U.S. leaders to get into the game.”

(p. 18) In writing about the events and the back story surrounding the espionage case of Julius and Ethel Rosenberg, Howard Blum, a contributing editor at Vanity Fair, seems at first glance to be going over well-trod territory. But “In the Enemy’s House” is not a mere rehash. Instead, it is an account of the two men who were principally responsible for tracking down the Rosenbergs: Robert Lamphere, an F.B.I. counterintelligence agent, and Meredith Gardner, the most experienced and able code-breaker working for the United States government.
. . .
Blum’s book is especially valuable in rebutting the dwindling few who still believe the Rosenberg case was about the government seeking to curb the civil liberties of dissenters. Suppression of dissent, Blum demonstrates, was the furthest thing from the two men’s minds.

The book under review, is:
Blum, Howard. In the Enemy’s House: The Secret Saga of the FBI Agent and the Code Breaker Who Caught the Russian Spies. New York: Harper, 2018.

(p. A11) MOSCOW — Russian state television hailed it as “one of the most advanced robots,” showing a tall, white android dancing clumsily to a catchy tune. It seemed so human.
There was a good reason:It was just a man in a robot costume.
In the television report, the robot, called Boris, spoke slowly with a very synthetic voice.
“I know mathematics well, but I also want to know how to draw and write music!” Boris said in a report broadcast on Tuesday [December 11, 2018] by the state-owned Rossiya-24 news channel. His eyes flashed mysteriously.
Boris danced in front of a crowd of children, who had gathered at a youth forum designed to help them choose their future professions.
“It is quite possible one of them could dedicate their lives to robotics,” the journalist Arseny Kondratiev said in his report. “At the forum, they had the opportunity to see one of the most advanced robots.” 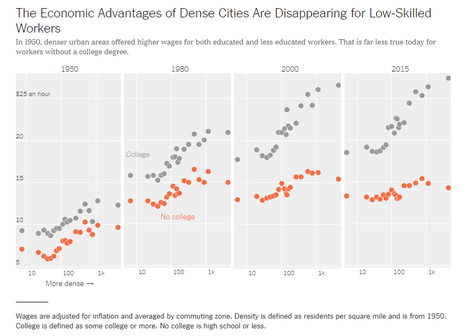 I attended David Autor’s lecture at the early-January American Economic Association (AEA) meetings, that is discussed in the passages quoted below. It was an interesting, and sometimes almost exciting lecture. More than once he said something like: ‘now here’s something I wouldn’t have believed before 72 hours ago when we got these results.’
But it seemed very much a work in progress. In his lecture he accepts the polarization of the labor market has a current fact, even in cities. (“Polarization” roughly implies that high-level and low-level jobs are fine, but mid-level jobs are disappearing.)
In a 2015 paper, that I like very much, Autor argued that polarization is a temporary phenomenon that he did not expect to last. This 2015 paper was not mentioned in his Ely Lecture at the AEA.

(p. B1) “People have lamented, ‘Well, all these areas that lost manufacturing, why don’t those workers just get up and go somewhere else?'” said Mr. Autor, who looked at wage data from the census and American Community Survey and recently presented the findings at the annual meeting of the American Economic Association. “It’s just not at all obvious what that place is. It’s less obvious to me now than it was a month ago.”

Mr. Autor attributes the declining urban wage premium in this chart to the disappearance of “middle-skill jobs” in production but also in clerical, administrative and sales work. Many of these jobs have gone overseas. Others have been automated out of existence.
This kind of work, he argues, was historically clustered in cities (meaning the entire labor market around cities, within commuting zones). And because of that, workers with limited (p. B5) skills could find better opportunities by moving there.
Now, the urban jobs available to people with no college education — as servers, cleaners, security guards, home health aides — are basically the same kind as those available in smaller towns and rural communities.

For the full commentary, see:
Emily Badger and Quoctrung Bui. “The Upshot; Opportunity in Cities Falls to the Educated.” The New York Times (Saturday, Jan. 12, 2019): B1 & B5.
(Note: the online version of the commentary has the date Jan. 11, 2019, and has the title “The Upshot; What if Cities Are No Longer the Land of Opportunity for Low-Skilled Workers?”)

(p. B5) Do not pity Timothy D. Cook. He has made hundreds of millions of dollars as Apple’s chief executive. He is regarded as one of business’s best bosses, and runs a company with a beloved brand and $130 billion in cash.
. . .
Whatever he does, Mr. Cook faces enormous expectations. It takes a lot to fuel growth at a company that had $265.6 billion in revenue in its last fiscal year.
The Apple Watch dominates the market for wearable technology and would be a smash hit for any other company. For Apple? Watches have been counted in the “other products” category in financial results.

In this excellent book, Arthur Diamond offers a spirited defense of open and free market system, saying that much of the complaints against capitalism is based on (1) mistakenly conflating free market competition with cronyism, and (2) grossly under-appreciating the innovative entrepreneur’s ability to solve problems in all sorts of areas–in the past and in the future. One of the central claims of the author, based on his understanding of the epistemology of innovation, namely, the necessity of self-funding of all breakthrough entrepreneurs, underlines the need for open and competitive markets if we are to enjoy in the future benefits of innovative dynamism, as we have in the past.