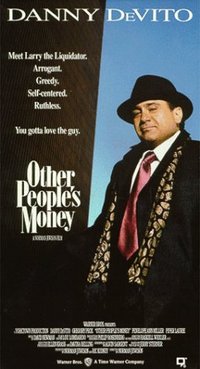 Danny DeVito was Larry the Liquidator in the movie “Other People’s Money.” The source of the image of the VHS tape box cover is Amazon.com.

A key passage from Larry the Liquidator’s great speech in “Other People’s Money”:

This company is dead. I didn’t kill it. Don’t blame me. It was dead when I got here. It’s too late for prayers. For even if the prayers were answered, and a miracle occurred, and the yen did this, and the dollar did that, and the infrastructure did the other thing, we would still be dead. You know why? Fiber optics. New technologies. Obsolescence. We’re dead alright. We’re just not broke. And you know the surest way to go broke? Keep getting an increasing share of a shrinking market. Down the tubes. Slow but sure.

You know, at one time there must’ve been dozens of companies makin’ buggy whips. And I’ll bet the last company around was the one that made the best goddamn buggy whip you ever saw. Now how would you have liked to have been a stockholder in that company? You invested in a business and this business is dead. Let’s have the intelligence, let’s have the decency, to sign the death certificate, collect the insurance, and invest in something with a future.

For a transcript, and audio version, of the full speech by Larry the Liquidator, see:
http://www.americanrhetoric.com/MovieSpeeches/moviespeechotherpeople’smoneydevito.html

Larry would not have been surprised by the following account of steam automobiles that mentions that the last maker of steam-powered cars, Doble, “managed to hang on until the early 30’s, building what many consider to be the finest of all the steam cars.”

The notion of steam cars seems quaint today, but they were a natural offshoot of an age when much of industry was powered by pressurized steam. By the end of the 19th century, steam engines were ubiquitous, running everything from factories to ships. As a mature, well-developed technology, steam was a logical competitor to electricity and gasoline as a power source for early cars.

Electric vehicles disappeared relatively quickly, a result of their batteries’ meager storage capacity and high weight. The popularity of early gasoline cars was hampered by the arduous, sometimes dangerous, hand-crank starting routine.
As a result, in the early decades of the 20th century steam managed to hold on against the “explosive” engine — as Stanley advertising derisively referred to the internal combustion motor. More than 125 companies manufactured steam automobiles. Among American companies, Stanley, White and Locomobile were the most successful, with Stanleys priced higher than mass-market Fords but below the luxury brands of the time.
Even the most innovative makers of steam cars were not impervious to developments in other technologies: the introduction of the electric starter on the 1912 Cadillac sealed their fate. While gasoline-powered cars became “transportation on demand,” steam cars still needed up to half an hour for the entire process of lighting the burners and developing sufficient pressure before driving away.
White dropped out of the steam business, and Stanley’s operation in Newton, Mass., was gone by the mid-1920’s. Only Doble, in Emeryville, Calif., managed to hang on until the early 30’s, building what many consider to be the finest of all the steam cars.

The Stanley Rocket Racer that held the land-speed record for four years for cars of all power plants, starting in 1906. It reached a speed of 127.659 mph. Source of photo, and caption information: NYT article cited above.