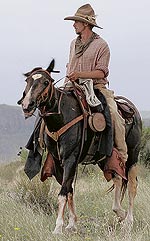 A cowboy on "Texas Ranch House."   Source of image:  the WSJ article cited below.

"Texas Ranch House" — circa 1867 — is the latest PBS experiment in transporting a group of people back to another era so we can watch them live and struggle the way our ancestors did.  (Part one of eight begins Monday, 8-9 p.m. ET, but check local listings.)  As with past series such as "Colonial House," everything — clothing, tools, food, housing and all-around deprivation — is authentic.  Once again, though, stuffing 21st-century mentalities into period costumes and situations is a tough fit. And once again, it’s the folks wearing the bodices that chafe the most.

The Western setting is fascinating for two reasons:  What seems familiar from movies and TV takes on fresh significance when there are real people — not pampered actors — trying to scratch out an existence on the frontier 24/7, with no plot to guide them.  There is also the fact, as one of the participants points out early on, that many of us exist today only because a forebear actually did make the real journey West and manage to survive there long enough to bear children.  What luck, we are reminded more than once during this series, that those ancestors were so different from contemporary Americans.

The trouble that threatens to sabotage the entire experiment develops in the widening gap between the cowboys and the Cooke family.  The first time one of the employees disses boss man Mr. Cooke, yelling "Don’t let your wife run your life," we react with disgust at the insult.  As one of the women in the household explains to the camera, all the cowboys "are sexist bastards."  Besides, instead of rising early to ride the range in search of mavericks for 10 hours, the cowboys — mostly young Americans plus one frisky British boarding-school boy playing the part of 19th-century remittance man — indulge in long naps during the 100-degree days and often wake up in the morning with hangovers after nights of hard drinking.

At some point, though, certain facts begin to sink in:  Mr. Cooke does have management shortcomings and Mrs. Cooke is far more involved in running the business side of the ranch than a frontier wife would have been.  The ladies, in general, don’t enjoy the roles or status that historical reality would dictate, and some act out in defiant, liberated ways.  A fatal flaw, if not the only one, for the success of the ranch enterprise.  In 1867, spending days making cornhusk dolls while the house filled with flies and vegetables rotted in the garden wasn’t an option for folks who wanted to stay alive.  And, like it or not, keeping the ranch hands happy, as obnoxious as they might be, was more important than maintaining marital bliss.

This being a made-for-television environment, no one perishes, but there are no happy endings here, either.  When one of the Cooke daughters says to the camera, "I feel lost and dazed and hurt," you feel genuinely sorry for her.  At the same time, it’s clearer than ever that emotional pampering, navel-gazing and gender warfare are modern luxuries.  Like it or not, if these had been features of daily life in the West 100 years ago, many of the people reading this would never have been born.