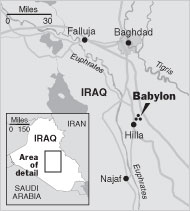 (p. A1) Ancient Babylon, celebrated as a fount of law, writing and urban living, sits just outside the modern-day city of Hilla, about 60 miles south of Baghdad.  Hilla is neither haunted by Sunni insurgents nor overwhelmed by Shiite militias.  And though it has a mix of Shiites and Sunnis, it has not been afflicted by the sectarian violence that has paralyzed so many other heterogeneous parts of Iraq.

Factories are churning, Iraqi security forces are patrolling and the streets pulsate with life — children bounding to school, crowds wading into markets, taxis gliding by.

(p. A6) The American military still maintains bases near Babylon, but next month, in a sign of how relatively stable the area has become, most troops will pull out and head north to Baghdad, where they are needed more.