I remember at a Republican Convention in Miami (1968 I think) when one of the networks had the late Frank Reynolds sitting with Galbraith and William F. Buckley, Jr., to provide occasional commentary on the scene.  On this occasion, Galbraith was going on and on about how all of the Republicans had arrived at the convention in their yachts.  Buckley sat by, nodding, in uncharacteristic silence.  Finally, with a few seconds until they needed to break away, Buckley slowly and deliberately drawled at Galbraith something like the following:  ‘And John, when you visit your friends in Hyannis Port, I trust that you find the accommodations adequate?’   As they cut to commercial, you could hear Reynolds, and others in the background, convulsed in laughter.

Actually Buckley and Galbraith were friends, for several years skiing together in Europe.  Apparently Galbraith was an indifferent and very slow skier, leading Buckley to observe that Galbraith looked as though he was skiing up the slope backwards.   (I read this many years ago, but, alas, do not remember where.)

David Levy and I once wrote a paper in which we measured the writing quality of articles by many important economists.  When we presented the paper to the meetings of the American Economic Association, Galbraith was the discussant of our paper.  For his comments, he basically recycled an old paper he had written on writing economics, and showed no signs of having read our paper.  But he did seem to enjoy our mentioning that by our measures, he turned out to be one of the best writers in the profession.  My memory is that at one point, just before or just after the formal proceedings, he actually patted me on the back.

Galbraith wrote many books.  One that I enjoyed, and learned from, was his account of the stock market crash of 1929.

I tell my classes that if we don’t throw entrepreneurs such as Michael Milken in prison, they can provide us with the means to keep CEOs pursuing shareholder value (profits) as their goal.  The way it would work would be that if CEOs start pursuing something else, their firm’s stock price falls, and the firm becomes an attractive take-over target for someone like Milken.

I also point out that if firms maximize profits, a lot of rich people benefit, but that a lot of average people benefit too—Drucker emphasized that roughly half of the value of stock equity in the United States is held by worker pension funds.

I did not agree with Galbraith’s efforts to grow the government, but he was witty, and urbane, and intelligent.  The intellectual scene was more interesting, and fun, with him than without him.  He will be missed.

Some references to publications mentioned in, or supporting, the discussion above: 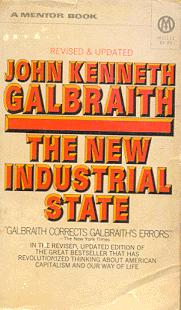