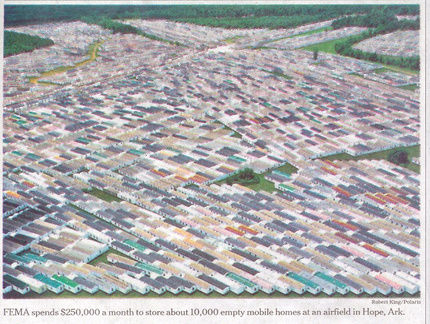 Photo scanned in from my paper copy of the NYT issue cited below.  Compare the version above to the cropped version that appeared in to online version below–whether deliverate or innocent, the effect of the cropping is to reduce the visual magnitude of the scene (and hence reduce the evidence of the magnitude of the waste).

(p. A1)  WASHINGTON, June 26 — Among the many superlatives associated with Hurricane Katrina can now be added this one:  it produced one of the most extraordinary displays of scams, schemes and stupefying bureaucratic bungles in modern history, costing taxpayers up to $2 billion.

A hotel owner in Sugar Land, Tex., has been charged with submitting $232,000 in bills for phantom victims.  And roughly 1,100 prison inmates across the Gulf Coast apparently collected more than $10 million in rental and disaster-relief assistance.

There are the bureaucrats who ordered nearly half a billion dollars worth of mobile homes that are still empty, and renovations for a shelter at a former Alabama Army base that cost about $416,000 per evacuee.

And there is the Illinois woman who tried to collect federal benefits by claiming she watched her two daughters drown in the rising New Orleans waters.  In fact, prosecutors say, the children did not exist.

The tally of ignoble acts linked to Hurricane Katrina, pulled together by The New York Times from government audits, criminal prosecutions and Congressional investigations, could rise because the inquiries are under way.  Even in Washington, a city accustomed to government bloat, the numbers are generating amazement.

"The blatant fraud, the audacity of the schemes, the scale of the waste — it is just breathtaking," said Senator Susan Collins, Republican of Maine, and chairwoman of the Homeland Security and Governmental Affairs Committee.

Source of the graphic:  the online version of the NYT article cited above.