(p. 1)  The babies were lined up under heaters and they breathed filtered air.  Few of them weighed more than three pounds.  They shared the Boardwalk there on Coney Island with Violetta the Armless Legless Wonder, Princess WeeWee, Ajax the Sword-Swallower and all the rest.  From 1903 until the early 1940’s, premature infants in incubators were part of the carnival.

It cost a quarter to see the babies, and people came again and again, to coo and to gasp and say look how small, look how small.  There were twins, even, George and Norma Johnson, born the day before Independence Day in 1937.  They had four and a half pounds between them, appearing in the world a month too soon because Dorothy Johnson stepped off a curb wrong and went into labor.

All those quarters bought a big house at Sea Gate for Dr. Martin A. Couney, the man who put the Coney Island babies on display.  He died broken and forgotten in 1950 at 80 years old.  The doctor was shunned as an unseemly showman in his time, even as he was credited with popularizing incubators and saving thousands of babies.  History did not know what to do; he was inspired and single-minded, distasteful and heroic, ultimately confounding.

(p. 31)  He displayed incubators developed by his mentors at the Berlin Exposition of 1896, and though they caught on in Europe, acceptance was slower in the United States.

Using babies from New York hospitals that lacked the facilities to care for them, Dr. Couney mounted a display at Luna Park, a Coney Island amusement park, in 1903, soon adding another at a second Coney Island park, Dreamland.

At least 8,000 babies passed through the incubators, and the doctor was credited with saving at least 6,500, according to news reports of the time.  The Johnson twins made it off the Boardwalk and grew up strong and tall. George Johnson found work, and a sense of freedom, driving trains up and down the coast for the Pennsylvania Railroad.  Norma Johnson married a man named Coe.  Between the twins there are nine children, 13 grandchildren and one great-grandchild.  George and Norma attended Dr. Couney’s induction ceremony yesterday.  "My father didn’t have any money, and this doctor says you can use our incubator for free, but you have to put them on display on Coney Island," Mr. Johnson said, sitting next to his sister on the porch at the Sheepshead Bay Yacht Club the other day.  "It was us and a lot of other people, too."

The twins will turn 68 the day before Independence Day, old enough to enjoy the seaside air on an idle weekday morning.

Down the Boardwalk, the beach is open.  Pretty girls and seagulls play their games.  For a few dollars, you can watch a baseball game, shoot paint pellets at a hungry young dude or become a tattooed lady.

The likes of Martin A. Couney nobody has seen in 60 years. 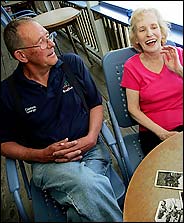 The Johnson twins who were displayed, and whose lives were saved, by Dr. Couney.  Source of photo:  online version of NYT article cited above.