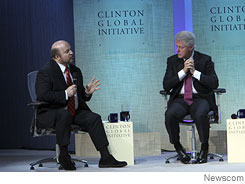 . . . the buzz in the hallways centered on a topic that until recently most philanthropists all but ignored:  registering poor people’s property so they could borrow against it to build businesses, pay taxes or for other purposes.  Many citizens of developing countries don’t formally have title to their land, and many economists — including Peruvian economist Hernando de Soto, another conference attendee — see this as a key source of urban poverty.  According to Mr. de Soto’s research, the value of unregistered land in developing countries totals over $9 trillion.  Mr. Clinton told the audience that these assets "cannot be converted into collateral for loans — wealth locked-up and locked-down — keeping people in grinding poverty instead of being an asset that can lift them up."  Up to 85% of urban land parcels in the developing world are unregistered, Mr. Clinton said, citing Mr. de Soto’s research.

But standing in the way of widespread land-ownership records are insufficient legal frameworks, confusing procedures and corrupt property registries.  And establishing land ownership is all but impossible in communist and socialist countries, where property usually is owned by the state, said John Bryant, chief executive of Operation Hope, a nonprofit in Los Angeles that provides financial services to the poor.