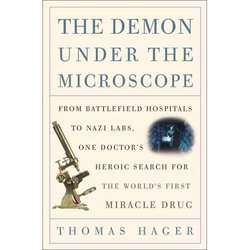 Economists have debated whether patents mainly provide incentives, or obstacles, to innovation.  In the story of the development of sulfa, the first powerful antibiotic, the desire for profit, through patents, was one motive that drove an important part of the development process; this, even though, in the end, sulfa turned out not to be patentable:

(p. P9) Mr. Hager follows a group of doctors into postwar German industry — specifically into the dye conglomerate IG Farben.  These men, having witnessed horrible deaths by infection on the battlefield, picked up on Ehrlich’s hypothesis by trying to synthesize a dye that specifically stained and killed bacteria.  Led by the physician-scientist Gerhard Domagk, they brought German know-how, regimentation and industry to the enterprise.

Year after year the team infected mice with streptococci, the bacteria responsible for so many deadly infections in humans.  The researchers then treated the mice with various dyes but had to watch as thousands upon thousands of them died despite such treatment.  Nothing seemed to work.  The 1920s turned into the ’30s, and still Domagk and his team held to Ehrlich’s idea.  There was simply no better idea around.

Then one of the old hands at IG Farben mentioned that he could get dyes to stick to wool and to fade less by attaching molecular side-chains containing sulfur to them.  Maybe what worked for wool would work for bacteria by making the dye adhere to the bacteria long enough to kill it.

The IG Farben conglomerate expected huge profits from Prontosil.  But then French scientists at the Pasteur Institute in Paris dashed these dreams.  The German scientists — all of them Ehrlich disciples — thought that the power to cure infection rested in the dye, with the sulfa side-chain merely holding the killer dye to the bacteria.  The scientists at the Pasteur Institute, though, showed that the sulfa side-chain alone worked against infection just as well as the Prontosil compound.  In fact, the dye fraction of the compound was useless.  You could have Ehrlich’s magic bullet without Ehrlich’s big idea!  This bombshell rendered the German patents worthless.  The life-saver "drug" turned out to be a simple, unpatentable chemical available in bulk everywhere.