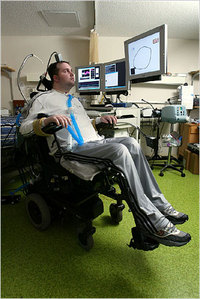 Paralyzed from a stabbing, Matthew Nagle can move computer cursor by means of a sensor implanted in his brain.  Source of image:  online version of NYT article cited below.

(p. A1)  A paralyzed man with a small sensor implanted in his brain was able to control a computer, a television set and a robot using only his thoughts, scientists reported yesterday.

Those results offer hope that in the future, people with spinal cord injuries, Lou Gehrig’s disease or other conditions that impair movement may be able to communicate or better control their world.

“If your brain can do it, we can tap into it,” said John P. Donoghue, a professor of neuroscience at Brown University who has led development of the system and was the senior author of a report on it being published in today’s issue of the journal Nature.