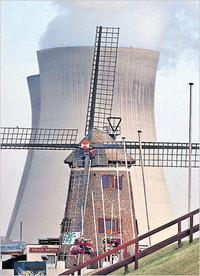 The Belguim windmill looks nice, but the electiricty is produced by the nuclear plant in the background.  Source of photo:  online version of the NYT article cited below.

The latest word on energy, from the 2006 World Economic Forum at Davos, Switzerland:

. . .  nuclear energy is suddenly back on the agenda — and not just here.  Spurred on by politicians interested in energy independence and scientists who specialize in the field of climate change, Germany is reconsidering a commitment to shut down its nuclear power plants.  France, Europe’s leading nuclear power producer, is increasing its investment, as is Finland.

At a time when industrialized countries are wrestling with how to curb carbon dioxide emissions, nuclear energy has one indisputable advantage: unlike coal, oil, natural gas, or even biological fuels, it emits no carbon dioxide. That virtue, in the view of advocates, is enough to offset its well-documented shortcomings.

“It has put nuclear back into the mix,” said Daniel C. Esty, director of the Center for Environmental Law and Policy at Yale University. “We’re seeing a new balancing of the costs and benefits.”

One thought on ““Nuclear Energy is Suddenly Back on the Agenda””