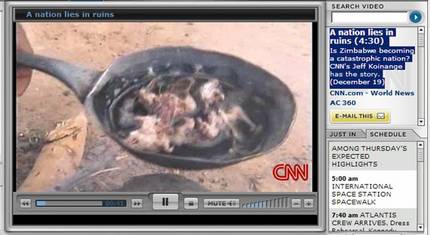 Her mother, Elizabeth, prepares the meat and cooks it on a grill made of three stones supporting a wood fire. It’s just enough food, she says, to feed her starving family of six.

Tonight, they dine on rats.

"Look what we’ve been reduced to eating?" she said. "How can my children eat rats in a country that used to export food? This is a tragedy."   . . .

This is a story about how Zimbabwe, once dubbed southern Africa’s bread basket, has in six short years become a basket case. It is about a country that once exported surplus food now apparently falling apart, with many residents scrounging for rodents to survive.

According to the CIA fact book, which profiles the countries of the world, the Zimbabwean economy is crashing — inflation was at least 585 percent by the end of 2005 — and the nation now must import food.

Zimbabwe’s ambassador to United States, Machivenyika Mapuranga, told CNN on Tuesday that reports of people eating rats unfairly represented the situation, adding that at times while he grew up his family ate rodents.

"The eating of the field mice — Zimbabweans do that. It is a delicacy," he said. "It is misleading to portray the eating of field mice as an act of desperation. It is not." 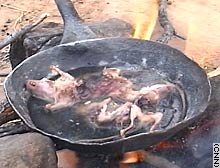