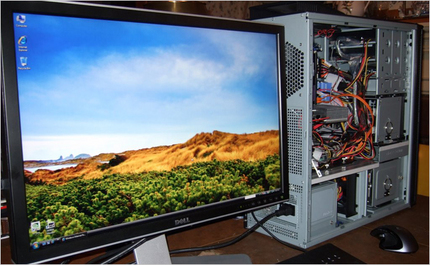 A PC screen displaying one of the wallpaper options from Microsoft’s Vista operating system.  Source of photo:  online version of the NYT article cited below.

I know what Microsoft wants. I know because I have been exploring its new operating system, Vista, which was released last week after five years of false starts, persistent bugs and great expectations. I also know because after spending three weeks building a computer from scratch to test out Vista, piecing the PC together from parts bought online, I want the same thing. What we want is to eliminate the PC altogether, to dismantle that box of green circuit boards and crammed-in wires, to break through even the most glorious flat-screen monitor and open up a new … vista.

That’s why the operating system has its name, of course, and why the screen images it includes show exotic landscapes with skies lit by sunset or sunrise or aurora borealis displays.

Apple had it easy: it kept its PC box closed, maintaining control over the hardware so it would perfectly suit its software. But Microsoft faced hundreds of thousands of boards, drives and chips like those I had spread out before me a few weeks ago, all of differing technological vintages, made by hundreds of companies with wildly different goals. Microsoft has taken these objects, along with the many thousands of PC programs now sold, and tried to create a system that would overlook their dizzying differences, bind them to a coherent vision and force them, in all their variety, to leave techne behind for the uncharted possibilities of magic. 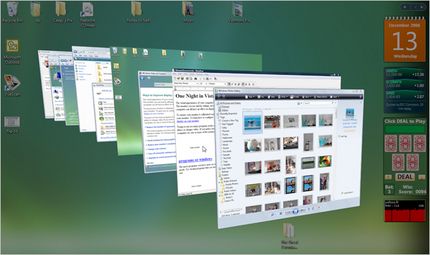 In the Vista operating system, the user can shuffle through open windows almost like a deck of cards.  Source of image:  online version of the NYT article cited above.