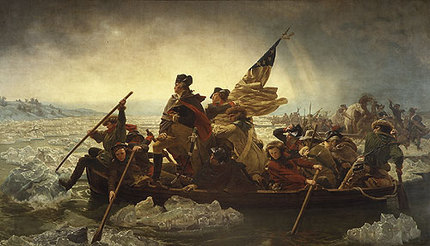 Besides Fischer’s book, there was a modest, but quite good, movie made by the History Channel a few years ago called "The Crossing" and starring Jeff Daniels as George Washington.  From Daniels’ comedy roles, I was surprised that he could portray Washington with such understated intelligence and humanity.

(p. B5)  The painting, with its life-size figures, “is one of the most frequently reproduced images in American culture,” said David Hackett Fischer, Warren professor of history at Brandeis University and author of the 2005 Pulitzer Prize-winning book, “Washington’s Crossing.” Leutze’s highly romanticized rendition captures a desperate effort, a turning point in American history, when on Christmas night in 1776 George Washington crossed the Delaware River with 2,500 troops in a surprise attack on Hessian soldiers.

“The crossing was a pivot point in a crucial campaign that rescued the revolution from failure,” Professor Fischer said, adding that it burnished not only Washington’s reputation as a leader, but also brought foreign support for the rebels’ cause.

Through the centuries the painting has been criticized aesthetically and for historical shortcomings. (The design of the fluttering American flag, for example, was not yet in use.) “You can add one inaccuracy to another, but Leutze understood the air of desperation, the small scale of the event and the very large meaning,” Professor Fischer said. “He got all of that right.”

The reference for the Fischer book is: 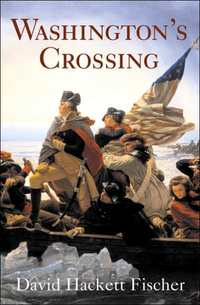