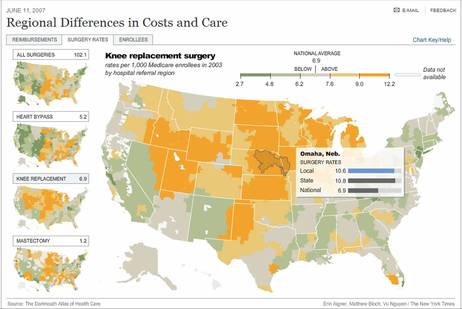 Source of map:  online version of the NYT article cited below.

The differences are one example of perplexing geographic variations in medical expenses and quality. And in a study that has important implications for the nation’s $2 trillion health care tab, researchers have found that more intensive and expensive care does not necessarily mean better outcomes. In fact, the opposite may be true.

The Dartmouth Atlas of Health Care, a research group that studies variations and costs in medical care, sums it up like this: Geography is destiny. It means that your chances of undergoing certain surgical procedures, visiting the doctor often or even dying in a hospital or at home are related to where you live.

For example, Medicare patients living in Rhode Island undergo knee replacements at a rate of 5 in 1,000 people. In Nebraska, the number rises to 10 in 1,000. Female Medicare enrollees who receive a diagnosis of breast cancer have nearly seven times the chance of having a mastectomy in South Dakota, where the rate is 2 in 1,000, as they do in Vermont, where the rate is .3 in 1,000.

In communities with surplus hospital beds, research shows, patients do not necessarily get more elective surgery, but they have more hospital stays, more frequent doctor’s visits and are more likely to be referred to specialists.

Dr. Elliott S. Fisher, who studies health care economics and is a member of the Dartmouth research group, said that part of the problem was the way doctors and hospitals were paid.

“In a payment system that rewards everybody for staying busy, every bit of capacity you have, whether it’s the number of specialists or the number of intensive care beds or the M.R.I. scanner, has to stay fully occupied because they bought them already and they have to keep paying for them,” Dr. Fisher said in a telephone interview.

Paradoxically, the Dartmouth research, which confirms some similar studies, shows that patients in high-cost areas are not necessarily getting better care. Dr. Fisher said that he and his colleagues found higher mortality rates in higher-spending regions.

Extra care without better outcomes translates into waste in the health care system. Some experts say that waste accounts for as much as if not more than 30 percent of the national spending on health care. Such spending now totals 16 percent of the gross domestic product. 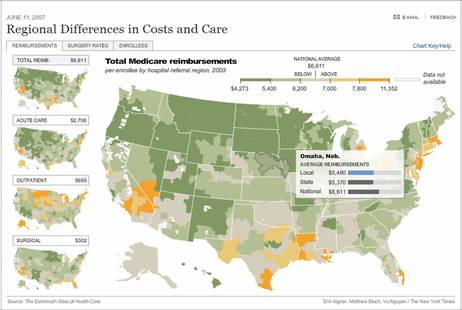