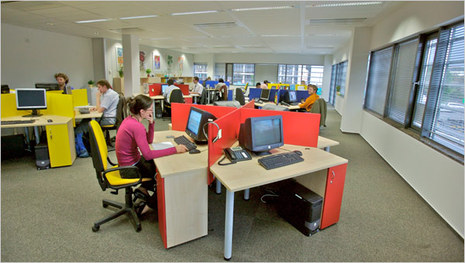 "Infosys employs workers in Brno, Czech Republic."   Source of caption and photo:  online version of the NYT article quoted, and cited, below.

(p. A1)  MYSORE, India — Thousands of Indians report to Infosys Technologies’ campus here to learn the finer points of programming. Lately, though, packs of foreigners have been roaming the manicured lawns, too.

Many of them are recent American college graduates, and some have even turned down job offers from coveted employers like Google. Instead, they accepted a novel assignment from Infosys, the Indian technology giant: fly here for six months of training, then return home to work in the company’s American back offices.

One of the constants of the global economy has been companies moving their tasks — and jobs — to India. But rising wages and a stronger currency here, demands for workers who speak languages other than English, and competition from countries looking to emulate India’s success as a back office — including China, Morocco and Mexico — are challenging that model.

In Europe, too, companies now hire Infosys to manage back offices in their own backyards. When an American manufacturer, for instance, needed a system to handle bills from multiple vendors supplying its factories in different European countries, it turned to the Indian company. The manufacturer’s different locations scan the invoices and send them to an office of Infosys, where each bill is passed to the right language team. The teams verify the orders and send the payment to the suppliers while logged in to the client’s computer system.

More than a dozen languages are spoken at the Infosys office, which is in Brno, Czech Republic.

(Note:  the somewhat different title of the online version was:  "Outsourcing Works So Well, India Is Sending Jobs Abroad.")