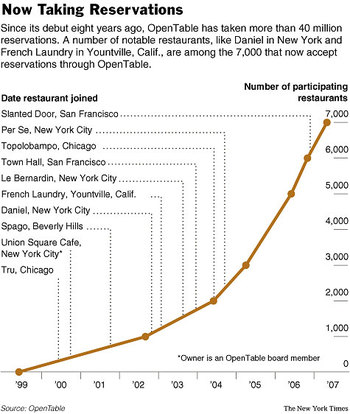 (p. C1)  SAN FRANCISCO, June 17 — Town Hall, one of the busiest restaurants in this food-crazed city, seems the very model of old-fashioned dining. Patrons who arrive to claim their reserved seats are greeted by a hostess who consults a piece of paper with the day’s reservations and leads her guests to the appointed table.

But upstairs, in the restaurant’s office, a different scene is playing out. In a veritable mission-control setting, a reservationist answers eight phone lines while seated in front of two computers that log reservations and hold an archive of past and future electronic bookings.

The software also reveals the idiosyncrasies of thousands of guests. The restaurant staff knows in advance, for instance, that a regular always insists on a table under a particular piece of artwork. They know about another person’s request for kosher food — but only when dining in certain company. And there is the guest so reliably late that staff members know to add 45 minutes to the reservation time.

After decades of relying on telephones to book tables, and piles of index cards — or a maitre d’hotel’s memory — to collect information about diners and their quirks, the restaurant business has finally gone unabashedly high-tech.

Technology may not make it any easier for diners to get a reservation at the most sought-after spots, like the French Laundry in Yountville, Calif., or Babbo in New York City. But the perseverance of a San Francisco-based company called OpenTable, which has come to dominate the business of online restaurant reservations, is making it much easier for restaurants to manage reservations and improve customer service.

(p. C5)  Making a reservation through OpenTable costs the diner nothing. And it reduces the inconvenience. Say you want a table on short notice at a busy Manhattan restaurant — Danny Meyer’s Union Square Cafe. Placing a phone call there usually requires calling during business hours, enduring loud jazz for hold music, and talking with a reservationist for a while before finding an acceptable time. OpenTable might give you the same results, but it will do the work in 10 seconds.

Many of the restaurants discovered that they had to surrender to the automation because their popularity suffered if they did not.

“It was a long, long time before that was proven,” said Bill Gurley, a Silicon Valley venture capitalist whose company, Benchmark, has invested $21.6 million in OpenTable over the years.

It took three years for OpenTable to seat its one-millionth diner. But now, the company seats two million diners every month. And Zagat, the restaurant rating service, has adopted OpenTable for reservations made through its site, zagat.com 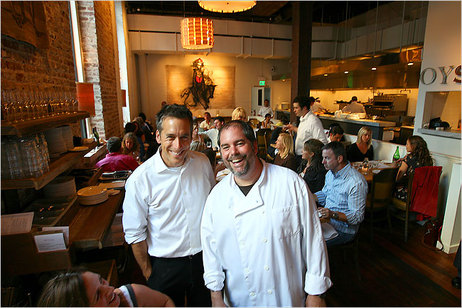 "Doug Washington, left, and Mitchell Rosenthal are partners in Salt House in San Francisco, one of 7,000 restaurants using OpenTable."  Source of caption and photo:  online version of the NYT article cited above.