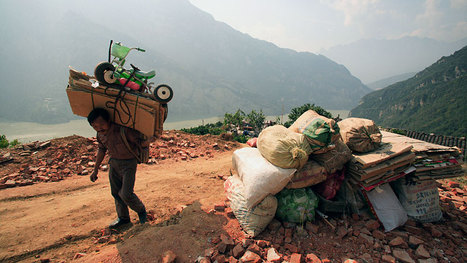 (p. A1)  JIANMIN VILLAGE, China — Last year, Chinese officials celebrated the completion of the Three Gorges Dam by releasing a list of 10 world records. As in: The Three Gorges is the world’s biggest dam, biggest power plant and biggest consumer of dirt, stone, concrete and steel. Ever. Even the project’s official tally of 1.13 million displaced people made the list as record No. 10.

Today, the Communist Party is hoping the dam does not become China’s biggest folly. In recent weeks, Chinese officials have admitted that the dam was spawning environmental problems like water pollution and landslides that could become severe. Equally startling, officials want to begin a new relocation program that would be bigger than the first.

The rising controversy makes it easy to overlook what could have been listed as world record No. 11: The Three Gorges Dam is the world’s biggest man-made producer of electricity from renewable energy.

(p. A13)  In the isolated mountain villages above the reservoir, farmers have heard nothing about a new resettlement plan. For many farmers, the immediate concern is the land beneath their feet. Landslides are striking different hillsides as the rising water places more pressure on the shoreline, local officials say.  . . .

Around daybreak on June 22, Lu Youbing awoke to the screams of her brother-in-law and the sickening sensation of the earth collapsing. Her mountain farmhouse in Jianmin Village buckled as a landslide swept it downhill. In all, 20 homes were demolished. Five months later, Ms. Lu is living in a tent, fending off rats and wondering where her family can go.

“We have nothing left,” she said. “Not a single thing.”

Winter is approaching, and she is trying to block out cold air — and rats — by pinning down the tent flaps with rocks. Villagers have been told that more landslides are possible. Ms. Lu lives with her second husband and their two children. They are too poor to buy an apartment in the city or to build a new home on higher ground. Local officials gave them the tent. Villagers have donated clothes.

The tents are pitched on the only available flat land — a terrace with a monument celebrating efforts by local officials to improve the environment.

“We don’t know about winter,” she said. “This is the only option we have. What else can we do?”

(Note:  online the title of the article is "Chinese Dam Projects Criticized for Their Human Costs.")

"The Three Gorges Dam is projected as an anchor in a string of hydropower “mega-bases” planned for the middle and upper reaches of the Yangtze River."  Source of caption and photo:  online version of the NYT article quoted and cited above.