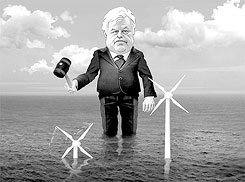 Part of a Greenpeace ad lambasting Senator Edward Kennedy’s opposition to windmills that would effect his view.  Source of image of part of ad:  online version of the WSJ article quoted and cited below.

(p. W8)  Behind much of the modern environmental movement lies the "do as I say, not as I do" sensibility of an aristocracy. It’s not surprising when a bunch of enviro-aristos line up opposition to a new road or a shopping mall or some other development that offends them. But there is something delicious about such obstructionists raising environmental concerns — almost all of them bogus — to try to prevent a wind farm, one of the cleanest sources of electricity we have, from being built in sight of their summer homes.

Sen. Kennedy presented the spectacle of working hard behind the scenes to sabotage the wind farm while publicly castigating the Bush administration for its alleged failure to push environmental technology.

The real outrage here is the agonizing delay in gaining approval for Cape Wind — all too typical, alas, of how things work, or don’t, in Massachusetts. A not-in-my-backyard campaign ought to target something at least potentially unpleasant, but the "visual pollution" that so angered Mr. McCullough would be minuscule. From Sen. Kennedy’s compound five miles away, a 417-foot tower appears about as tall as the thumbnail at the end of your outstretched arm. It makes you wonder how Cape Wind’s opponents would react if a developer planned a pharmaceutical factory in, say, Hyannis — civil disobedience, perhaps? Exquisitely catered, of course. 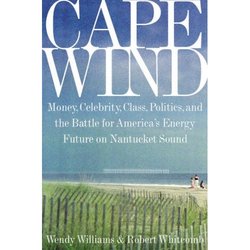