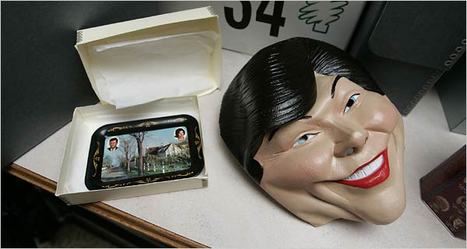 "A Kennedy-era tray and a Laura Bush mask at an Ohio library honoring first ladies. The library received a $130,000 earmark."  Source of caption and photo:  online version of the NYT article quoted and cited below.

(p. A23)  WASHINGTON, Nov. 12 — Buried deep in the largest domestic spending bill of the year is money for a library and museum honoring first ladies. The $130,000 was requested by the local congressman, Representative Ralph Regula, Republican of Ohio. The library was founded by his wife, Mary A. Regula. The director of the library is his daughter, Martha A. Regula.

Other “namesake projects” in the bill include the Charles B. Rangel Center for Public Service at City College of New York, named for the chairman of the House Ways and Means Committee; the Thad Cochran Research Center at the University of Mississippi, named for the senior Republican on the Senate Appropriations Committee; and the Thomas Daschle Center for Public Service at South Dakota State University, honoring the former Senate Democratic leader.

The bill also includes “Harkin grants” to build schools and promote healthy lifestyles in Iowa, where Senator Tom Harkin, a Democrat, is running for re-election.

Namesake projects are not new, but the appetite for such earmarks appears to be undiminished. The items illustrate the way in which lawmakers funnel federal money to projects in their home states, despite promises to rein in the practice. House and Senate negotiators last week approved a modest reduction in pet projects for health care, education and other domestic programs. But more than 2,200 hospitals and clinics, schools and colleges, museums and social service agencies get money for specific projects, including health information technology, teacher training and the promotion of sexual abstinence. Rather than making hard choices, negotiators accepted almost all the earmarks recommended by either chamber.

Senators John McCain of Arizona and Tom Coburn of Oklahoma, both Republicans, cited the first ladies library as one of the more egregious. Mr. McCain said it illustrated the “many wasteful items tucked away in this bill.”

Source of map graphic:  online version of the NYT article quoted and cited above.