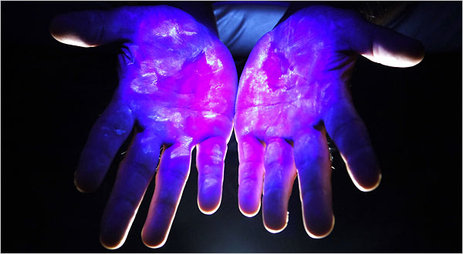 "A special light reveals deadly bacteria."  Source of caption and photo:  online version of the NYT article quoted and cited below.

If health care in the U.S. were a free market, with unregulated entry, and real consumer choice, it is hard to believe that some Wal-Mart-of-health-care wouldn’t come along that would gain huge market share and profits by providing its employees incentives to wash their hands.

(p. A1)  PITTSBURGH — At a veterans’ hospital here, nurses swab the nasal passages of every arriving patient to test them for drug-resistant bacteria. Those found positive are housed in isolation rooms behind red painted lines that warn workers not to approach without wearing gowns and gloves.

Every room and corridor is equipped with dispensers of foamy hand sanitizer. Blood pressure cuffs are discarded after use, and each room is assigned its own stethoscope to prevent the transfer of microorganisms. Using these and other relatively inexpensive measures, the hospital has significantly reduced the number of patients who develop deadly drug-resistant infections, long an unaddressed problem in American hospitals.

The federal Centers for Disease Control and Prevention projected this year that one of every 22 patients would get an infection while hospitalized — 1.7 million cases a year — and that 99,000 would die, often from what began as a routine procedure. The cost of treating the infections amounts to tens of billions of dollars, experts say.

But in the past two years, a few hospitals have demonstrated that simple screening and isolation of patients, along with a relentless focus on hygiene, can reduce the number of dangerous infections. By doing so, they have fueled a national debate about whether hospitals are doing all they can to protect patients from infections, which are now linked to more deaths than diabetes or Alzheimer’s disease.

(p. A16)  Dr. Richard P. Shannon, who championed a program to reduce catheter infections at Allegheny General Hospital in Pittsburgh, was able to show administrators that the average infection cost the hospital $27,000. He demonstrated that reimbursement payments for weeks of extended treatment were not keeping pace with actual costs. “I think it was assumed that hospitals didn’t mind treating these infections because they were getting paid for it,” Dr. Shannon said.

A major emphasis at the Pittsburgh hospitals has been hand hygiene. Studies have consistently shown that busy hospital workers disregard basic standards more than half the time. At the veterans hospital, where nurses have taken to pushing elevator buttons with their knuckles, annual spending on hand cleaner has doubled. 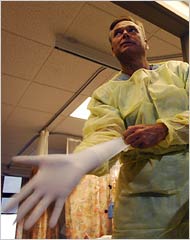 In the photo on the right, Pittsburgh nurse Bill Cunningham, "puts on a gown and gloves before approaching patients with infections."  Source of graph, caption, and photo:  online version of the NYT article quoted and cited above.