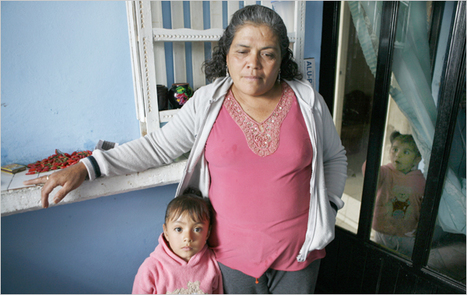 "HOMELAND SECURITY.  Many women in Mexico, like Estela Palacio Calzada, with her granddaughter, rely on money sent back from the U.S. "  Source of caption and photo:  online version of the NYT article quoted and cited below.

Adam Smith argued in The Theory of Moral Sentiments, that altruism is more effective when it is directed toward those we know best–mainly our family, and immediate neighbors.

A policy implication may be that the most effective foreign aid is to have more open immigration policies, that then permit the migrants to send back funds to those in their home country who they know best.

THE money flows in dribs and drabs, crossing borders $200 or $300 at a time. It buys cornmeal and rice and plaid private school skirts and keeps the landlord at bay. Globally, the tally is huge: migrants from poor countries send home about $300 billion a year. That is more than three times the global total in foreign aid, making “remittances” the main source of outside money flowing to the developing world.

Surveys show that 80 percent of the money or more is immediately spent, on food, clothing, housing, education or the occasional beer party or television set. Still, there are tens of billions available for savings or investment, in places where capital is scarce. While remittances have been shown to reduce household poverty, policymakers are looking to increase the effect on economic growth.

Some migrants, for instance, send home money to savings accounts at small bank-like microfinance institutions, which use the resulting capital pool to lend to local entrepreneurs. 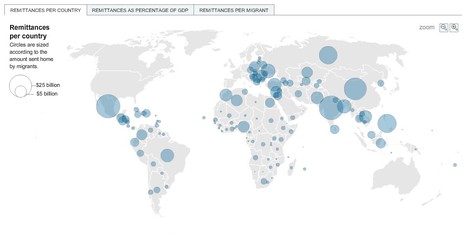 Source of map graphic:  online version of the NYT article quoted and cited above.