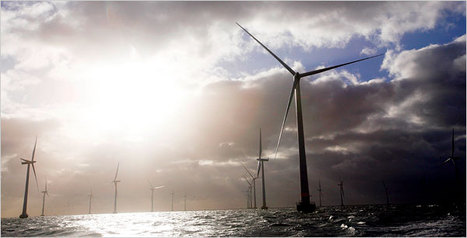 "A wind farm near Malmo, Sweden. The use of wind power in many European countries has stagnated in recent years."  Source of caption and photo:  online version of the NYT article quoted and cited below.

(p. C1)  Yet Sweden’s gleaming wind park is entering service at a time when wind energy is coming under sharper scrutiny, not just from hostile neighbors, who complain that the towers are a blot on the landscape, but from energy experts who question its reliability as a source of power.

For starters, the wind does not blow all the time. When it does, it does not necessarily do so during periods of high demand for electricity. That makes wind a shaky replacement for more dependable, if polluting, energy sources like oil, coal and natural gas. More-(p. C5)over, to capture the best breezes, wind farms are often built far from where the demand for electricity is highest. The power they generate must then be carried over long distances on high-voltage lines, which in Germany and other countries are strained and prone to breakdowns.

In the United States, one of the areas most suited for wind turbines is the central part of the country, stretching from Texas through the northern Great Plains — far from the coastal population centers that need the most electricity.

In Denmark, which pioneered wind energy in Europe, construction of wind farms has stagnated in recent years. The Danes export much of their wind-generated electricity to Norway and Sweden because it comes in unpredictable surges that often outstrip demand.

In 2003, Ireland put a moratorium on connecting wind farms to its electricity grid because of the strains that power surges were putting on the network; it has since begun connecting them again.

In the United States, proposals to build large wind parks in the Atlantic off Long Island and off Cape Cod, Mass., have run into stiff opposition from local residents on aesthetic grounds.

As wind energy has matured as an industry, its image has changed — from a clean, even elegant, alternative to fossil fuels to a renewable energy source with advantages and drawbacks, like any other.

“The environmental benefits of wind are not as great as its champions claim,” said Euan C. Blauvelt, research director of ABS Energy Research, an independent market research firm in London. “You’ve still got to have backup sources of power, like coal-fired plants.”

(Note:  online the title was simply "Sweden Turns to a Promising Power Source, With Flaws.")