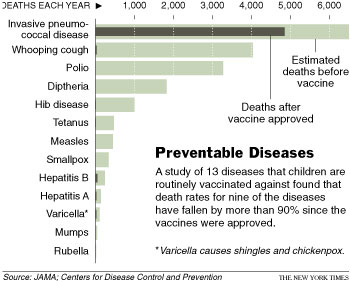 Source of graphic:  online version of the WSJ article quoted and cited below.

I hypothesize that most of the health gains from modern medicine come from a few advances, with vaccines being a very prominent example.  (My hypothesis implies that many health care procedures do relatively little to increase health and longevity.)

(p. A18)  Death rates for 13 diseases that can be prevented by childhood vaccinations are at all-time lows in the United States, according to a study released yesterday.

The study, by the Centers for Disease Control and Prevention in Atlanta, and published in The Journal of the American Medical Association, is the first time that the agency has searched historical records going back to 1900 to compile estimates of cases, hospitalizations and deaths for all the diseases children are routinely vaccinated against.

In nine of the diseases, rates of death or hospitalization declined more than 90 percent since vaccines against them were approved, and in the cases of smallpox, diphtheria and polio, by 100 percent.

In only four diseases — hepatitis A and B, invasive pneumococcal diseases and varicella (the cause of chickenpox and shingles) — did deaths and hospitalizations fall less than 90 percent. Those vaccines are all relatively new — the one for chickenpox, for example, was adopted nationally only in 1995. Also, some diseases like hepatitis typically strike adults, who are less likely to be immunized.

The results “are a testament to the fact that vaccines can drive diseases down to near nil,” said Dr. Gregory A. Poland, chief of the vaccine research group at the Mayo Clinic.

One thought on “Huge Health Gains from Vaccines”