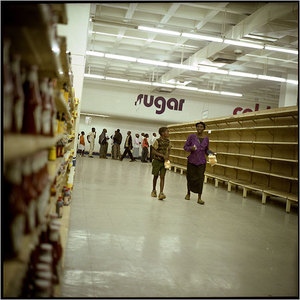 "Essentials like bread, sugar and cornmeal have all but vanished in Zimbabwe after the government commanded merchants nationwide to counter 10,000-percent-a-year hyperinflation by slashing prices in half and more. The shelves at this grocery store are mostly bare."  Source of the caption and the photo:  online version of the NYT article cited below.

(p. A1)  BULAWAYO, Zimbabwe, July 28 — Robert G. Mugabe has ruled over this battered nation, his every wish endorsed by Parliament and enforced by the police and soldiers, for more than 27 years. It appears, however, that not even an unchallenged autocrat can repeal the laws of supply and demand.

One month after Mr. Mugabe decreed just that, commanding merchants nationwide to counter 10,000-percent-a-year hyperinflation by slashing prices in half and more, Zimbabwe’s economy is at a halt.

Bread, sugar and cornmeal, staples of every Zimbabwean’s diet, have vanished, seized by mobs who denuded stores like locusts in wheat fields. Meat is virtually nonexistent, even for members of the middle class who have money to buy it on the black market. Gasoline is nearly unobtainable. Hospital patients are dying for lack of basic medical supplies. Power blackouts and water cutoffs are endemic.

Manufacturing has slowed to a crawl because few businesses can produce goods for less than their government-imposed sale prices. Raw materials are drying up because suppliers are being forced to sell to factories at a loss. Businesses are laying off workers or reducing their hours.

The chaos, however, seems to have done little to undermine Mr. Mugabe’s authority. To the contrary, the government is moving steadily toward a takeover of major sectors of the economy that have not already been nationalized.

(p. A8)  . . .  Most of the goods on store shelves this week were those people did not need or could not afford — dog biscuits; ketchup; toilet paper, which has become a luxury here; gin; cookies.

At various locations of TM, a major supermarket chain, aisles of meat coolers were empty save a few plastic bags of scrap meat for dogs. Flour, sugar, cooking oil, cornmeal and other basics were not to be found. A long line hugged the rear of one store, waiting for a delivery of the few loaves of bread that a baker provided to stay in compliance with the price directive.

The government’s takeover of slaughterhouses seems ineffectual: this week, butchers killed and dressed 32 cows for the entire city. Farmers are unwilling to sell their cows at a loss.

The empty grocery shelves may be the starkest sign of penury, but there are others equally worrisome. Doctors say that at most, there is a six-week supply of insulin and blood-pressure medications. Less vital drugs like aspirin are rarities.

“You can boil willow bark, just as Galen did,” one physician quipped. 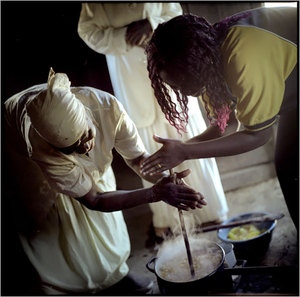