“John Young, from the Apollo 16 crew, works on the lunar surface in April, 1972.”  Source of caption and photo:  online version of the NYT review quoted and cited below.

(p. B14)  When the Apollo 11 astronauts toured the world after their July 1969 moon landing, recalls Mike Collins, the pilot of the mission’s command module, he heard the phrase “We did it” everywhere they went. The “we,” he remembers in David Sington’s documentary “In the Shadow of the Moon,” didn’t refer to Americans, or to any nationality, but to the human race. Millions around the world who had watched on television as men walked on the moon for the first time felt that they had participated in a great adventure that ennobled the species.

Threaded through the film are fragments of taped interviews with eight other Apollo astronauts: Alan Bean, Gene Cernan, Charlie Duke, Jim Lovell, Edgar Mitchell, Harrison Schmitt, Dave Scott and John Young. These snippets appear almost randomly, in no particular order, and it is impossible to keep track of who’s who. Cumulatively, however, they create a group portrait of explorers with “the right stuff”: men with a much higher resistance to fear than average.

Mr. Collins remembers the intense physical sensations that he experienced during the Apollo 11 mission but that he never associated with panic. What could have been more terrifying than the moment when the module’s computer was found to be overloaded, just as Mr. Armstrong and Mr. Aldrin were about to touch down? But Mr. Armstrong calmly went about improvising a solution.

If there was a lack of fear, there were a thousand little worries. Through every phase Mr. Collins fretted about the details that had to mesh for the mission to be successful. But he never feared for his life. That, in a nutshell, is the right stuff. 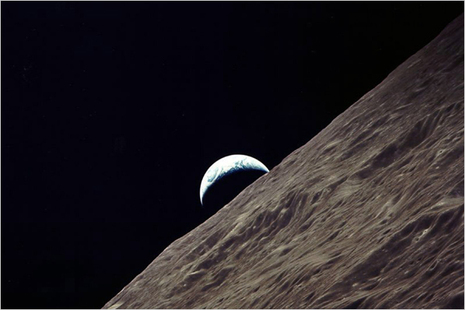 The earth rising over the moon.  Source of photo:  online version of the NYT review quoted and cited above.